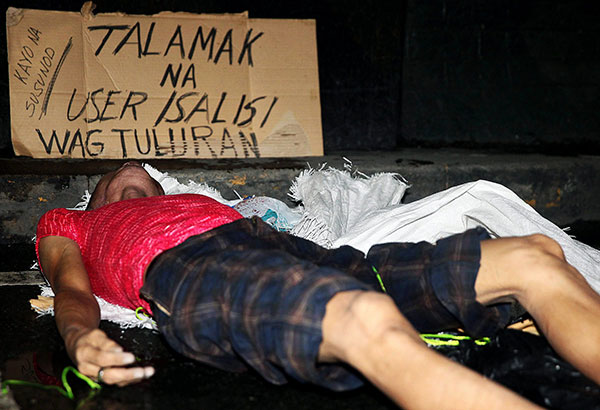 In his first state-of-the-nation address (Sona) before a joint session of Congress on July 25, Duterte declared a unilateral ceasefire with the Maoists to help pave the way for the resumption of the talks.

While it orders the New People's Army to continue its operations against drug trade operators and protectors, the Communist Party of the Philippines said it will no longer support the anti-drug war of President Rodrigo Duterte's administration, which they say is "bound to fail" following the increasing number of extra-judicial killings of suspected drug personalities.

In a statement on Friday, August 12 the CPP said their anti-drugs operation "will no longer be considered as cooperative with the Duterte regime's undemocratic and anti-people "war on drugs". He was apparently referring to condemnations by U.N. Secretary General Ban Ki-Moon in June and the U.N. Office on Drugs and Crime earlier this month of Duterte's "apparent endorsement of extrajudicial killings, which is illegal and a breach of fundamental rights and freedoms".

The UNODC then made a proposition "to bring drug traffickers to justice with the appropriate legal safeguards in line with global standards and norms".

"We strongly urge the Philippines to ensure its law enforcement efforts are consistent with its human rights obligations", the embassy added.

The statement said almost 1,000 people have been killed in just a little more than one month, although official police data show that 592 drug personalities have been killed in 5,422 operations as of Sunday. This figure includes at least 246 killed by "unidentified assailants" and 76 "salvage victims". Duterte said Friday during a sortie to a military camp on the strife-torn southern island of Jolo. "We in government, and I myself who ordered the campaign against drugs, claim full and sole responsibility for it".

During his campaign for president and again after his election in May, the former prosecutor nicknamed "The Punisher", said that journalists killed on the job were corrupt and they deserved it.

"I would like to appeal to all that we stop this war".

Conde said the country's jail system already does not have adequate resources to handle detainees, the majority of whom are facing drug charges and are being held without bail as they awaited trial - and that's even before Duterte's proposed "war on terror" begins.

Duterte's spokesmen later said his threat was just "rhetorical". I have yet to complain, the United Nations complaining publicly.