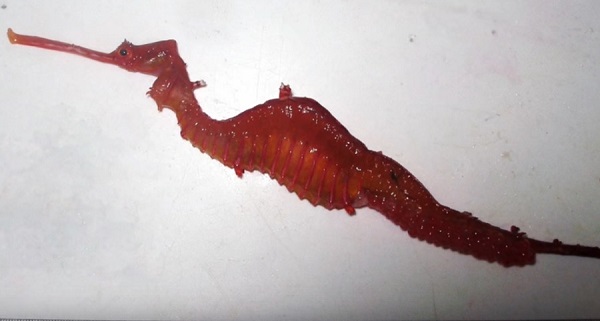 In 2015, researcher Greg Rouse at the Scripps Institution of Oceanography and colleagues described a new species, the ruby seadragon, using dead specimens found in museums and later pulled up from trawls.

The researchers predict that the Ruby Seadragon may have lost its appendages owing to evolution.

The footage was published Thursday in a study featured in Marine Biodiversity Records. While common and leafy seadragons tend to live in shallow kelp beds, the ruby seadragon's coloration suggested that scientists would have to dive a bit deeper to catch a glimpse, Eva Botkin-Kowacki reports for the Christian Science Monitor.

"It was really quite an awesome moment", Josefin Stiller, a marine biologist with Scripps Oceanography and co-author of the new study, said in a statement.

Video footage of the ruby seadragon was captured using a remotely operated vehicle with a low-light video camera, because it lives at depths of more than 164 feet (50 metres). Instead of living amongst seaweed and kelp, the ruby seadragon prefers the company of sea sponges.

Using the preserved specimens, the researchers were able to assemble a rotating 3-D model of the new seadragon using a CT (computer tomography) scan of 5,000 X-ray slices.

"Until then, no one suspected a third species of seadragon existed", says Greg Rouse, who first described the dragon from a preserved specimen collected almost a hundred years ago. It differs from the other two, weedy and leafy seadragons, in its colour and lack of "leaves" - appendages that grow off the dragons for camouflage.

Scripps Institution of Oceanography partnered with the Western Australian Museum and launched a scientific expedition off the coast of Western Australia to find Ruby Seadragons in the wild.

"It was really quite an unbelievable moment when we discovered that the ruby seadragon lacks appendages". Its closest relatives, the leafy and common seadragon, inhabit much shallower depths of 3-25 meters.

This fortunate run, all undertaken during a single day, revealed some never before known details about the lives of ruby seadragons. Its ruby color is probably an evolutionary trait, as camouflage in the deeper, dimly lit waters, they added.

Rouse says learning more about this species shows that, "We've still got so much more to do in terms of documenting biodiversity".

Seadragons are marine fish in the same taxonomic family as pipefish and seahorses.

The ruby seadragon also has a curled tail, similar to a seahorse, which researchers think could help this fish hold on to objects in high-surge waters.

This latest discovery confirms that ruby seadragons lack ornate leaf-like appendages, a feature that scientists had considered to be distinguishing characteristics based upon the two known species, the common and leafy seadragons. "Western Australia has such a diverse range of habitats, and each one is deserving of attention".

The Buzzing Stock - Wells Fargo & Company (NYSE:WFC)
Shares in Bank of America , for example, have increased 36 percent since the day before polls opened - more than any of its peers. The slide below gives a retail banking sales practices remediation plan update from Wells Fargo's earnings quarterly supplement. 1/14/2017

Manchester United striker Zlatan Ibrahimovic wins December player of the month
I was expecting the ball to be in front of me and then I realized I was in front of it. He told United's website yesterday: "I'm chasing the head trophy, the Premier League". 1/14/2017

People Are Freaking Out About Donald Trump's L.L. Bean Tweet
Bean's PR attempt to distance themselves from Trump, Donald Trump retaliated by tweeting his followers to support L.L. The agency said in a letter dated January 4 that her contribution exceeded the individual donor limit of $5,000. 1/13/2017

Did We Hear 707hp Hellcat — Dodge Durango SRT
This week's video, "Cage", offers up some weird metaphors - a CGI "hellcat" thing bites into a can of fuel and becomes the Demon. Additionally, Dodge fans are invited to check the www.ifyouknowyouknow.com webpage for updates on the Hellcat-beating Demon. 1/13/2017

Campaigners warn of tunnel risks to Stonehenge
A tunnel under Stonehenge has been given the go-ahead by the Department for Transport (DfT). Consultations for the proposed route will continue until 5th March. 1/13/2017

New England Patriots, Bill Belichick Weary of Jadeveon Clowney
It is that, as well as the most controversial one. "Every single play in the playoffs is a very, very important play". The Texans will travel to Gillette Stadium to face the New England Patriots for the AFC Divisional game on Saturday. 1/13/2017

Philadelphia police officer creates portrait of Master Sgt. Debra Clayton
To do that, law enforcement say they need to find the person who led to the deaths of two of their own this week. As of Thursday morning, the fund for Clayton's family was at almost $43,000, on a way to a new goal of $50,000. 1/13/2017

Google-parent Alphabet's drone project may not soar after all
The studies found that at, this time, Project Loon presents a much more promising way to connect remote parts of the world. The X division of the company made a decision to cancel the project, as confirmed by a spokesperson for the division. 1/13/2017

Swansea complete Narsingh deal
Narsingh signed for PSV from Heerenveen in 2012 for around €4 million and made 135 appearances for the club, scoring 23 times. On Olsson, Clement said: "The two clubs are talking about the possibility (of a transfer )". 1/13/2017

TCA 17: FX Signs Donald Glover To Production Deal with FX Productions
Needless to say, we'll be seeing a lot of Donald Glover this year and Atlanta Season 2 will probably be well worth the wait. Donald Glover has been forced to delay the second season of his Golden Globe-winning show Atlanta due to filming conflicts. 1/13/2017