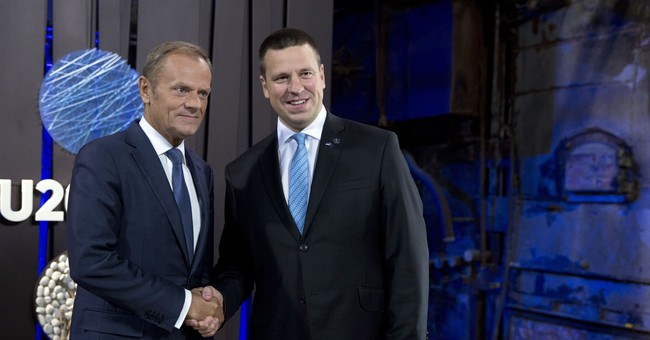 The EU has estimated that Britain will owe tens of billions of euros (dollars) to cover outstanding liabilities.

British Prime Minister Theresa May said Friday that Britain and European countries need to step up cooperation in cyber security.

European Union leaders, minus British Prime Minister Theresa May, must rule on whether and when "sufficient progress" has been made.

However British hopes that her initiative would enable the talks to move swiftly on to the second phase - including a post-Brexit trade deal - received a fresh setback after European Commission president Jean-Claude Juncker said it would require "miracles" if they were ready to start before the end of October.

She did not say whether she thought EU regulations passed during the transition period would be matched by Britain but said, on EU law, that British courts would be able to take European Courts of Justice rulings into account. They had been expected to do just that on October 19-20 at their next summit, but Barnier's assessment indicated the tentative deadline will be missed. "Millions more work in the public and private sectors delivering public services and making a vital contribution to our economy", they said. "I'm saying that there will be no sufficient progress from now until October unless miracles would happen".

The EU has insisted on progress in three key divorce issues: Britain's exit bill, the fate of Northern Ireland, and the rights of three million EU citizens living in Britain and a million Britons living in Europe.

She said: "Our resolve to draw on the full weight of our military, intelligence, diplomatic and development resources to lead worldwide action with our partners on the issues that affect the security and prosperity of our peoples is unchanged".

Theresa May has reaffirmed that Britain is "unconditionally committed" to maintaining security cooperation with the European Union as the United Kingdom prepares for Brexit.

"We will continue to work with our North Atlantic Treaty Organisation allies, our European neighbours and the EU to support a future partnership of unprecedented breadth and depth, that will guarantee the security and stability of the continent for generations to come".

Confederation of British Industry chief Carolyn Fairbairn and Trades Union Congress general secretary Frances O'Grady urged both sides to make sure rights would be protected even if Brexit talks resulted in no deal.

In a meeting with Mrs Merkel later that day, the leaders discussed the importance of settling the issue of citizens' rights "at the earliest opportunity". Barnier said Thursday that progress had been made but a "big gap" remained in some areas.

"For the European Union, the only way to reach sufficient progress is that all commitments undertaken by the 28 are honored by the 28", Barnier said.