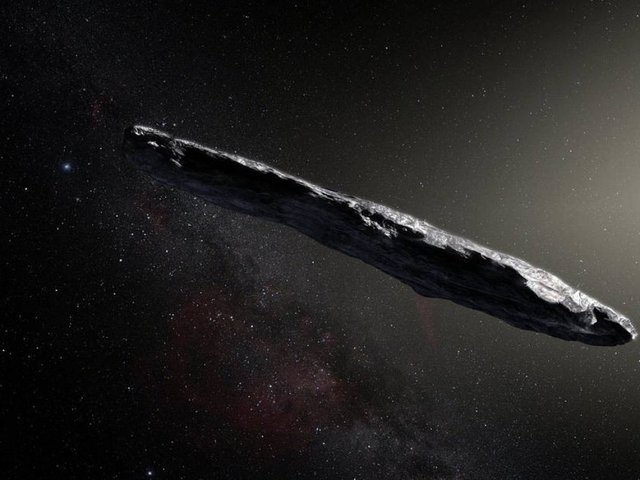 The first interstellar object spotted racing through our Solar System last month has an "unusual" elongated, cigar shape and is red in colour, astronomers say. Speed was vital as 'Oumuamua was rapidly fading as it headed away from the Sun and past the Earth's orbit, on its way out of the Solar System. It is surrounded by the trails of faint stars that are smeared as the telescopes tracked the moving asteroid.

None of the approximately 750,000 known asteroids and comets is thought to have originated outside our Solar System, but formation models suggest that orbital migration of the giant planets ejected a large fraction of the original planetesimals into interstellar space.

The discovery may provide clues as to how other solar systems formed, said the researchers, who published their study in the British journal Nature.

"For decades we have theorised that such type of interstellar objects is out there, and now -we have direct evidence that they exist", stated by Thomas Zurbuchen, associate administrator of NASA Science Mission in Washington. Observations from ESO's Very Large Telescope in Chile and other observatories around the world show that this unique object was traveling through space for millions of years before its chance encounter with our star system. Urgency for viewing from ground-based telescopes was vital to get the best data. Meanwhile, the VLT's FORS instrument with four different filters allowed a team of astronomers, led by Karen Meech of the Institute for Astronomy in Hawaii, to discover that its brightness varied by a factor of 10. The most elongated objects we have seen to date are no more than three times longer than they are wide.

They also believe that the object, which is dark - absorbing 96% of the light that hits it - could contain abundant hydrocarbons, the building blocks for life that many scientists believe first arrived on Earth from asteroids. It's incredibly dense, likely made up of a rocky or high metal content, though it has no water or ice.

"In the days that followed, the European Southern Observatory (ESO) brought its Very Large Telescope to bear on the object - which by this point had been named 1I/2017 U1, or "'Oumuamua".

It is travelling about 138,000km per hour (38.3km per second) relative to the Sun, and is now about 200 million km from Earth - the distance between Mars and Jupiter. The object passed Mars's orbit around November 1 and will pass Jupiter's orbit in May of 2018. Estimates range from one to ten per year, and with new, more powerful telescopes, astronomers hope to see more of them in the near future. Since asteroids merge during the process of planet emergence, this mysterious object can tell us many things about the generation of planets around its hidden parent star. The name was chosen by Hawaiian language experts, and it means "messenger sent from the distant past to reach out to us".

PayPal's new Facebook Messenger extension helps sellers invoice buyers and receive payment
We appreciate that you continue to use Messenger to connect with the people you care about most. In the coming weeks, Facebook says it plans to roll out 4K resolution to additional countries. 11/24/2017

Bill Clinton accused of sexual assault . . . again
According to the report the women are ready to go to the press if Clinton's legal team fails to negotiate with them. These four women were hired at that investor's headquarters and designated to work directly with Clinton. 11/24/2017

India allows Kulbhushan Jadhav's mother, wife to visit Pakistan, but 'conditions apply'
In Islamabad, Pakistan foreign office spokesperson Mohammad Faisal confirmed that India had asked for Jadhav's mother to meet him. In a note verbale to New Delhi last week, Islamabad said Jadhav's wife would be allowed to meet him on "humanitarian grounds". 11/24/2017

These Food Stores Are Open on Thanksgiving
Sam's Club opens at 7 a.m. on Black Friday, and the store says sales prices will be valid through that Sunday while supplies last. Bass Pro Shops: Stores will have free crafts, free photos with Santa and other kids' activities Thanksgiving and Black Friday. 11/24/2017

Pakistan court orders release of Hafiz Saeed
India has accused Hafiz Saeed of masterminding the Mumbai attack in November 2008 and the 2001 Parliament attack in Delhi. The department also said that his release may warrant worldwide sanctions against Pakistan. 11/24/2017

Drinking Four Cups Of Coffee A Day May Have Health Benefits
Drinking coffee was consistently linked with a lower risk of death from all causes and from heart disease. They warned people should not start drinking coffee, or increasing their intake, for health reasons. 11/24/2017

Chilly forecast for Thanksgiving Day
Thanksgiving Day was sunny but started off chilly as the average temperature across the state has been in the low and middle 40s. The sunshine will continue for Black Friday with highs moderating a bit: mid 30s north to mid 40s south. 11/24/2017

Danny Rose gives Tottenham fans more reasons to worry
Of course they are "fuming". "I told him he wouldn't play against Stuttgart and afterwards I talked to him again and the team". I was angry about not being involved in the squad, but at the same time, I understand and I respect his views'. 11/24/2017

Apple to Launch iPhone SE 2 in Early 2018
The device will be exclusively manufactured by Wistron in India, who is already manufacturing some of the current iPhone SE . This will effectively be Apple's "budget" iPhone , which the company will primarily push in markets like India and China. 11/24/2017

Broadband firms must ditch 'misleading' speed ads
Previously broadband providers could advertise "up to" speeds as long as they were available to at least 10% of customers. Currently ISPs are allowed to use headline speeds that only 10 per cent of customers receive. 11/24/2017