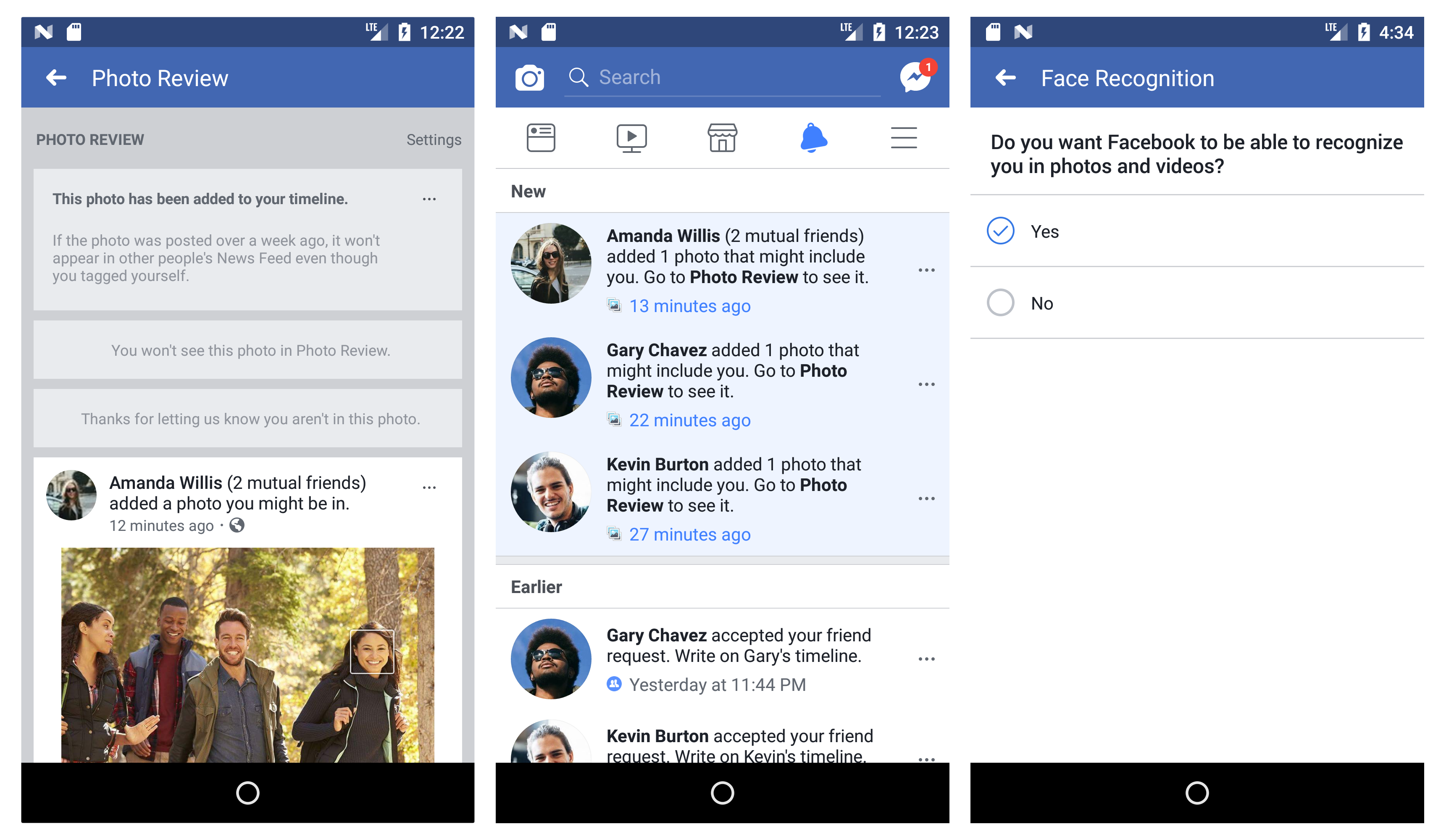 Joaquin Quiñonero Candela, director of applied machine learning at Facebook, notes that if you are in a photo and are part of the audience for the post, you'll now be notified, even if you haven't been tagged. The alerts make it easier for users to tag themselves if they like the photo, but they also allow users to contact the uploader of the photo if they have a problem with it. Facebook said the new feature can also protect users from online impersonators by spotting people who are attempting to use the same profile picture.

However, the company says it respects the privacy settings which its users decide on when posting the photo, and therefore, if you're not in the audience set by the person uploading the picture, you won't be notified that you've possibly appeared in that person's photo. If you're a little sensitive about how often you show up in pics on the internet, Facebook has a new privacy tool that may interest you.

Soon, the Facebook app will have an opt-in toggle for the facial recognition alert. If someone is trying to use your photo as a profile picture, Facebook will give you a notification.

The new settings will appear on Facebook platforms everywhere, with the exception of Canada and the European Union, where the company doesn't offer facial recognition. The company already uses facial recognition to suggest friends to tag in photos by scanning the photo for faces already stored in its system.

More information on Facebook's use of facial recognition can be found by visiting the help center.

These new additions expand on how Facebook already uses facial recognition, which is primarily through "tag suggestions" - a feature started in 2010 that suggests which of your friends should be tagged in photos that you upload to the site.

The new feature, which Facebook frames as a control measure for a user's image, is one of three new applications of facial recognition technology the company announced Tuesday.

"We're doing this to prevent people from impersonating others on Facebook", Candela wrote. The post is titled: " Hard Questions: Should I Be Afraid of Face Recognition Technology? . "We've also heard from groups that work with survivors of domestic violence that being able to see messages is often a valuable tool to assess if there is risk of additional abuse".

Boy calls police afraid Christmas will be stolen after watching 'The Grinch'
So imagine her surprise when Officer Lauren Develle arrived on the family's doorstep later that evening to reassure the boy. TyLon Pittman's brother captured the interaction on video, which he posted on his Facebook page. 12/20/2017

McCain feeling well, returning after holidays
Bob Corker of Tennessee announced they would vote yes for the Republican's tax plan when it came to the floor of the Senate. CBS News reports McCain will head home to Arizona this week, but miss the Republican's much anticipated tax bill vote. 12/20/2017

Virgin Hyperloop One Sets New Speed Record
Virgin Hyperloop One set a test speed record of almost 240 miles per hour during its third phase of testing at its site in Nevada. Earlier this year, the company announced that it plans to have working hyperloop systems deployed by 2021. 12/20/2017

The Public Pulse: A frightening ban on words
Senator Jeff Merkley, D-Ore., likened the reported word ban to the dystopia portrayed in George Orwell's classic 1984. A former federal official offered an explanation, saying that the move is not about censorship. 12/20/2017

Details Revealed in Dog Mauling of Virginia Woman Found in Woods
Local news station WTVR reported that he found her dogs in the woods, appearing to be "guarding" Bethany's body. She had defensive wounds on her hands and arms, and it appeared that she was alive when the animals attacked. 12/20/2017

Rite Aid Corporation (NYSE:RAD) Shorts Decreased by 7.95% After Short Covering
The Quinn Opportunity Partners Llc holds 1.68 million shares with $4.97 million value, down from 1.90M last quarter. Several hedge funds and other institutional investors have recently made changes to their positions in the company. 12/20/2017

Jacksonville Jaguars: Huge victory over Houston clinches a playoff spot
The extra opportunities benefited the players and the Jaguars. "What a feeling", Khan said . "We did, and it didn't work out". The unit held Houston to 186 yards. "It's huge (making the playoffs)", veteran defensive end Calais Campbell said. 12/19/2017

Dragon Ball FighterZ Recreates Series' Most Dramatic Moments
Those who pre-order Dragon Ball FighterZ will get an additional day of early access to that beta, starting on January 13. Beerus specialises in attacks without any blind spots, and his super-move is called "God of Destruction's Judgement". 12/19/2017

Possibility of Nuclear war can not be ruled out, says Pak NSA Janjua
He said the U.S. had opted to side with India against Pakistan and now India and the U.S. were now on the same page even on Kashmir issue. 12/19/2017