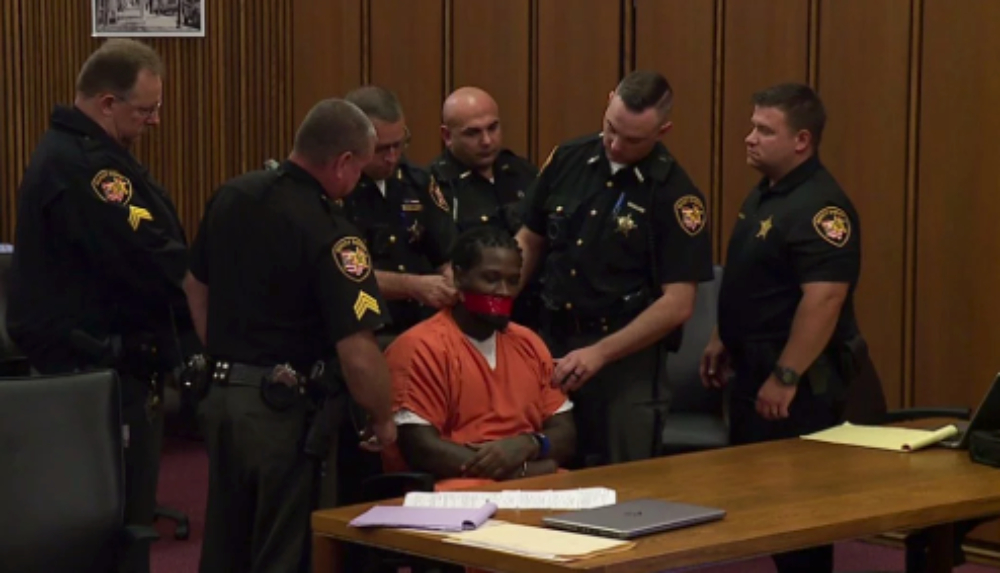 Judge Russo, who was sentencing Williams over charges including aggravated robbery, kidnap and theft, eventually lost his patience and ordered officers to gag him.

Williams kept talking, even as his attorney stood to speak to the court. "Listening to the duct tape go pffffttttt, I still here that at night", Williams said.

Russo ordered his deputies to place a piece of red tape over Williams's mouth.

"You are trying to take my life, and you are not letting me tell you what's going on", Williams says on the video.

Six officers surround Williams with one issuing a threat before putting the tape on his mouth. When he was finally quiet, the judge sentenced him to 24 years in prison.

It didn't get any better for Williams.

Later, the judge says he will hear from the lawyers and tells Williams to "zip it". "I am going to give you a chance to talk", Russo added, before warning the defendant: "If I have to, I will gag you in one second". "You'll get a chance to talk".

In the 1970 case IL v. Allen, the justices unanimously decided that defendants do not have an absolute right to even be present at their trial, let alone speak at it.

Judge Russo says he was forced to take extreme measures to keep a clear record and maintain courtroom decorum. Franklyn Williams was awaiting his sentence for three alleged armed robberies and had a few words he wanted to share with the judge first reports Fox 8. He was granted an appeal after a court found he was misinformed about when he would be eligible for release. Williams complained about authorities removing his possessions from his cell, and just meeting his attorney "the other day", but Russo said this was brought up at the wrong time.

In any other circumstance, Williams would be held in contempt of court.

Google Clock app can now use Spotify for alarms
Google has updated its Clock application on the Play Store, which is honestly a pretty boring app that gets pretty boring updates. At the top of the list you'll find your recently played or self-selected songs, and after that you'll see curated playlist. 8/04/2018

West Nile infected mosquitoes found in Louisville
According to World Health Organisation, there is one reported case of transplacental (mother-to-child) WNV transmission. Most infected people don't exhibit any symptoms but if you do you should see a healthcare professional immediately. 8/04/2018