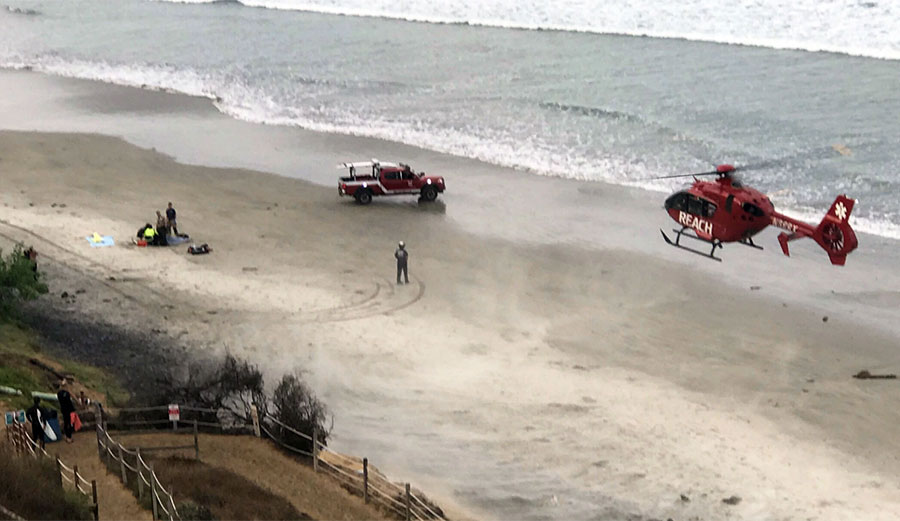 A 13-year-old boy was seriously injured when he was attacked by an 11-foot shark off Southern California on Saturday.

The attack was reported just before 7 a.m.in the 900 block of Neptune Ave.at Beacon Beach, San Diego County Sheriff's Department said. But then, "I realized that he was yelling, 'I got bit!"

Hammel said the water around the boy was filled with blood and his back was torn by bites.

The boy was pulled onto a kayak and rushed to shore, where footage showed him being treated by lifeguards before a helicopter lifted him to a hospital.

He was immediately taken aboard a kayak by three people also lobster diving nearby, including an off-duty police officer, off-duty lifeguard.

'At this time, we have not received additional reports of any shark sightings in the area but are advising the public to stay out of the water, ' Lifeguard Captain Larry Giles said.

A group applied pressure to the wounds while beach-goers called paramedics, who put the victim in a helicopter to Rady Children's Hospital.

He endured traumatic injuries to his upper torso and was airlifted to Rady Childrens Hospital. There were several divers offshore because it was the first day of lobster season, said Giles.

"I yelled at everyone to get out of the water: 'There's a shark in the water!'" Hammel added.

The shark has not been seen since the attack.

"The beaches are going to be closed down right now, we're asking people not to go in the water", Giles said.

Officials are working with a marine scientist to identify the type of shark involved in the attack, the release says.