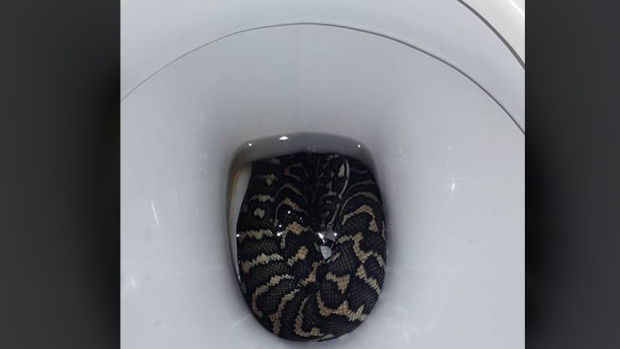 If you do happen to come across a snake hiding in the toilet Snake Catchers Brisbane, Ipswich, Logan and Gold Coast advised leaving it there until a snake catcher can come to remove it.

Helen Richards, 59, was holidaying at her sister-in-law's home in Chapel Hill in Brisbane's west when she was bitten on Tuesday afternoon.

"But I jumped up, pulled away and turned around quickly enough to see this long thing, about 10 inches (25 centimetres) out of the toilet, just receding back down into the bowl".

She peeked into the toilet and thanks to her experience growing up on a farm in Queensland, identified her assailant as a non-venomous carpet python.

The non-venomous carpet python was spooked by the woman sitting down above it and simply "lashed out in fear", according to the reptile experts.

She subsequently called out snake catchers to retrieve the snake from her toilet.

From there, Richards contacted a snake catcher for assistance, and handler Jasmine Zelený arrived on the scene.

The post said: "She went into the bathroom to go to the toilet, but did not turn the light on".

"The snake was safely removed and relocated, and the customer handled the situation like an absolute champ, having a sense of humour about it the entire time". "However, being bitten on the behind by a Carpet Python in the toilet is certainly not a regular occurrence, and it was the first time we have turned up to an incident of this kind".

The "Snake Catchers of Brisbane" posted about the event on their Facebook page.

Jasmine Zeleny captured the snake and said the reptiles often hang out in toilets on hot days to keep cool, but that she hadn't attended an incident where someone had been bitten on the loo before.

"Don't poke and prod it, don't continue to flush the toilet".

"Put the lid down, secure it, and call a snake catcher", they wrote.