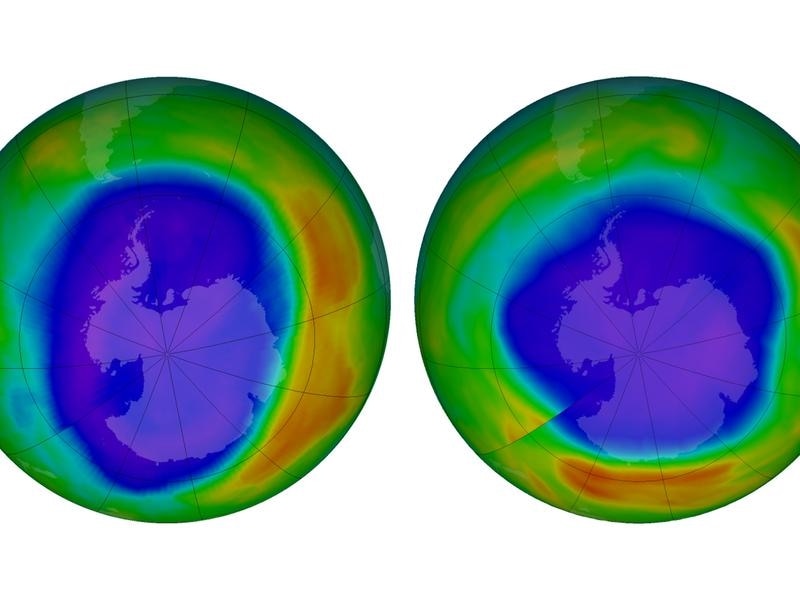 China is responsible for a recent rise in emissions of an illegal chemical that destroys the ozone layer, according to scientists.

The global team of scientists from the UK, South Korea, Japan, the US, Australia and Switzerland who conducted the study have published their latest findings in the journal Nature.

"CFCs are the main culprit in depletion of the stratospheric ozone layer, which protects us from the Sun's ultra-violet radiation", said lead author Matt Rigby, an atmospheric chemist at the University of Bristol.

Any production and use of CFC-11 is a violation of the Montreal Protocol, a 1987 agreement that phased out chlorofluorocarbons that cause damage to the ozone layer. It is assumed that CFCs have been used illegally in the manufacture of new products.

A new study finds that annual CFC emissions from eastern China have jumped by 7,000 tonnes since 2013, when global emissions began to rise again - although the increase was only discovered previous year.

There were indications that some region in eastern Asia was still emitting thousands of tonnes of CFC-11, but the exact location was not known.

"This research identifies the major source region for new CFC-11 emissions as eastern mainland China, likely due to the new production of insulating foams used in buildings, which is not permitted under the Montreal Protocol", said Paul Fraser, one of the paper's authors.

Reports a year ago from the Environmental Investigation Agency blamed Chinese foam factories in the coastal province of Shandong and the inland province of Hebei, which surrounds Beijing.

Industries in northeastern China have spewed large quantities of an ozone-depleting gas into the atmosphere in violation of an worldwide treaty, global scientists say.

The researchers acknowledged that China produces a substantial fraction of the emissions, but they said it is possible that other countries have seen smaller increases, as well.

The work provides further evidence that CFC-11 has been produced in China in the last few years, but doesn't account for the total estimated increase in emissions.

The findings also have implications for the fight against climate change. But since 2012, air samples had shown a troubling amount of CFC-11 present in them.

CFC-11 persists in the atmosphere for about half a century, and still contributes about a quarter of all chlorine - the chemical that triggers the breakdown of ozone - reaching the stratosphere.

'American Taliban' Lindh released from prison
Lindh is shown here in a photo from the madrassa (Islamic school) Arabia Hassani Kalan Surani Bannu in Pakistan. The bureau defended itself in a statement that said Lindh's release followed federal laws and guidelines. 5/24/2019

Judge refuses to block Trump bank subpoenas
House Speaker Nancy Pelosi (D-Calif.) welcomed Wednesday's ruling, saying she was "very excited" by the news. He said there were about 10 subpoenas sent to individuals or entities that have "nothing to do with Mr. 5/24/2019

USA shutters large migrant facility in Texas amid flu outbreak
The move comes one day after a teenage migrant who had been held at the facility died after being diagnosed with the flu . Joaquin Castro, chairman of the Congressional Hispanic Caucus. 5/24/2019

Judge orders Jussie Smollett’s criminal case file to be unsealed
However, that decision to seal records can be challenged and overturned after the fact. CNN was among numerous media outlets fighting to have the records unsealed. 5/24/2019

EE launching the first United Kingdom 5G network on May 30
EE's 5G network will go live on the 30th of May, while Vodafone will begin offering its own 5G service from the 3rd of July. EE also announced its new 5G mobile plans would be available to pre-order from Wednesday, ahead of the launch next week. 5/24/2019

Pompeo Accuses Huawei of Lying About Ties to Chinese Government
He added, "The existence of those connections puts American information that crosses those networks at risk". "The Huawei CEO - on that, at least - isn't telling the American people the truth". 5/24/2019

Sony looks to streaming for PlayStation
If players know that all of their PS4 games will be playable on the PS5 from the beginning, then they're more likely to invest. According to Bloomberg the first time that numerous PlayStation staff heard about the deal was when it was public announced. 5/24/2019

Tesla Slashes Prices Again
Tesla CEO Musk shows a rendering of the future assenbly plant in Shanghai that will be crucial to the automaker's future. Dan Ives of Wedbush Securities' slashed his price target for Tesla shares from $275 all the way down to $230. 5/24/2019

Send your name to NASA to fly aboard Mars 2020 rover
To achieve that, NASA will need not only United States government funding but the assistance of industry and worldwide partners. The mission already has over 350,000 people signed up to send their names, which will be stenciled on chips, to the red planet. 5/24/2019

Rehabbing Yoenis Céspedes fractures ankle after 'violent fall' at ranch
In the Mets' case, it would all depend on how Cespedes suffered the injury. "I've never looked over my shoulder", he said. Washington hitters have posted a team on-base percentage of.314 this season, led by Anthony Rendon with a mark of.429. 5/24/2019