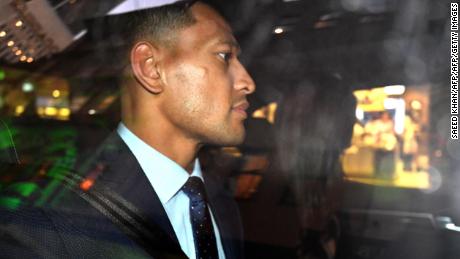 "Even if I win, Rugby Australia can appeal", he said.

The flow of donations to Folau's GoFundMe page spiked today from around $350 after midnight.

"YOU are in a fight that YOU chose to be in after YOU broke the terms of YOUR contract", mitchell posted on Twitter.

"And it'll send the message once and for all: If he wants to continue to use his profile and platform to preach hate, Israel Folau picked the wrong sport, because intolerance such as his will never be tolerated in rugby", he added.

Folau's biggest claim in his first interview with 2GB's Alan Jones on Friday morning was that his legal pursuit of Rugby Australia is not being motivated by money in any way - and he is being driven purely by the principles of his Christian faith.

Folau, whose contract with the Australian union's governing body was terminated in May over homophobic social media posts has set up a GoFundMe page to raise the NZ$3.15 million says he needs to cover costs in his bid to seek reinstatement. His dismissal followed earlier incendiary remarks about the gay community a year ago, for which he escaped sanction. "I do not believe that it is fair or right that I be punished for my religious beliefs", he said.

There is nothing stopping Folau from taking more money than the cost of his legal fees.

'I believe that sharing the Bible is an act of love and compassion'.

Asked on Sydney radio 2GB if RA had a social media clause in his contract that would have prohibited him from speaking about his faith, Folau said "no, absolutely not".

He believes he has done that while standing "up for the word of God".

"There's things that the bible might go against, things that people are doing, but from my perspective, I'm all about doing that from a place of love and believing in the bible that if people have an opportunity to hear that so that if they do choose to repent and turn away from that then they have an opportunity to be in heaven one day, which is what I long for people to do". "I have the fight of my life on my hands and every little bit will help".

Folau, whose lucrative contract with Rugby Australia and his team the NSW Waratahs was torn up in May after he posted an Instagram post suggesting gay people and other "sinners" will go to Hell, shared a video on the crowdfunding site saying the legal stoush is a battle for all religious Australians.

"In response, Rugby Australia have already said that they will "divert significant resources" to fight me in court", Folau said in his statement.

Last year the 73-test star signed a four-year deal with RA worth an estimated A$5 million and has been one of Australian rugby's highest paid players since he crossed codes in 2013.

Stepping down Georgian Parliament Leader Resigns Over Mass Anti-Russian Protests
Tamar Kordzaia, leader of the opposition Republican Party, said protests would continue to press their demands. The small south Caucasus nation, a US ally, fought and lost a short war against Moscow in 2008. 6/22/2019

Spider-Man Venom Likely Says Feige; But Under Sony
One of them is that Sony did a great job creating that franchise and giving it a life and giving it its own world. Audi vehicles will also make an appearance at the "Spider-Man: Far From Home " Hollywood premiere this summer. 6/22/2019

Biden under fire over comments about working with segregationist senators
Biden's campaign has pushed back fiercely against the barrage of criticism he has received from 2020 presidential candidates. Contrary to more liberal Democratic electorates in other regions, the SC primary trends older, moderate and pragmatic. 6/22/2019

Gulbadin Naib tries to obstruct Eoin Morgan’s way to get him out
After opting to bat, England made a slow start before opener James Vince (26) was dismissed by Dawlat Zadran. Afghanistan went on to taste a 150-run defeat at the hands of England at Old Trafford. 6/22/2019

Tracking Latest Picks, Trades, Rumors From Brooklyn
The 6-8, 208-pound Reddish is cut from the same mould as Hunter, but he's coming off an uneven freshman year with the Blue Devils. All four of those players come off the books a year from now, freeing up $63.1 million to spend in free agency. 6/22/2019

Sri Lanka topple England at Cricket World Cup
Sri Lanka's total of 232-9 represented something of a recovery after a collapse to three for two. But it was after his wicket that they lost the way as Starc ran through the batting taking 4/55. 6/22/2019

Jussie Smollett case to be reviewed by special prosecutor, IL judge says
If the office is unwilling to take the case, the request would then go to county prosecutors' offices around the state. Now, Foxx has doubled down on her decision and explained even further why her decision remains. 6/22/2019

The Punter's De-Brief: Woodland wins in style
While his T9 finish isn't bad by any means, inconsistencies kept McIlroy from being a menace to the likes of Woodland and Koepka. Woodland's son Jaxson turns two next week, and his wife Gabby is expecting again at the end of the summer. 6/22/2019

ICC CWC'19: PCB chief phones Sarfaraz Ahmed after losing to India
Pakistan is now placed at the ninth position in the tournament standings with just three points. The Pakistan teams of the '90s, used to enjoy upper hand but now India is better than Pakistan. 6/21/2019

Apple recalls older generation 15-inch MacBook Pro over fire risk
Long-suffering loyalists can check if their WhackBook Pros are covered by entering their serial number into Apple's support page. And in case you forgot when you got your computer, here are the exact specs of the model in question . 6/21/2019