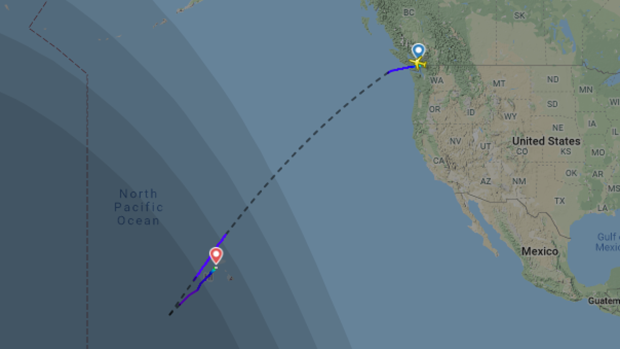 An Air Canada flight bound for Australia that left Vancouver early Thursday made an unscheduled landing in Honolulu after turbulence injured several passengers.

According to an Air Canada spokesperson the plane experience "un-forecasted and sudden turbulence", forcing the plane to land in Honolulu.

An Air Canada spokeswoman was quoted as saying: "We are now making arrangements for the passengers including hotel accommodations and meals in Honolulu, as well as options for resumption of the flight".

"A lot of screaming, the girl in front of me hit the plastic overhead and actually snapped it and broke it and the oxygen mask came down", one passenger told Today. The plane was forced to make an emergency landing at Honolulu airport.

Turbulence: The flight from Vancouver to Sydney diverted to Honolulu at around 6:45 am.

Luke Wheeldon told the Honolulu news station KTIV about half the passengers had not been wearing seatbelts.

Passengers told reporters the turbulence had tossed people into the air, some hitting the ceiling. "A couple of the air hostesses were bringing food out at the time, and they hit the roof as well".

In another case, 29 people were injured after a Turkish Airlines flight encountered severe turbulence on its approach to New York's John F. Kennedy International Airport in March.

Air Canada says it is arranging accommodation and meals for the affected passengers.

There were also 15 crew members aboard the flight.