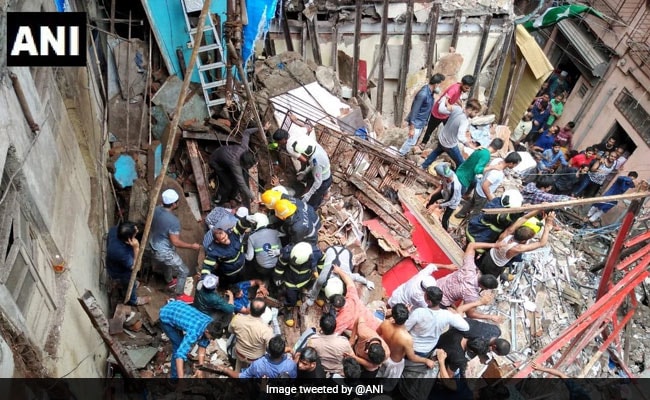 A four-storey building in Mumbai's Dongri area collapsed on July 16.

Building collapses are common in India during the June-September monsoon season, when heavy rains weaken the foundations of structures that are poorly constructed.

Between 40 and 50 people are believed to be trapped in the rubble, Brihanmumbai Municipal Corporation's disaster management division said, adding that it has erected a shelter at a nearby girls' school for those rescued. "We heard people trapped in the debris shouting for help, but we were helpless because it was hard to move the beams and debris".

"We have been visiting the BMC (Brihanmumbai Municipal Corporation) for funds to fix the buildings".

The collapse of a decades-old multistorey building in Mumbai on Tuesday has revived focus on illegal buildings way past their sell-by date endangering lives in India's commercial capital, where finding an accommodation is a huge challenge.

Maharashtra chief minister Devendra Fadnavis said the building was 100 years old. It was Kesarbai building in Dongri which is a four-floor structure. Late on Tuesday evening, municipal commissioner Praveen Pardeshi visited the site and said his immediate priority was to rescue the trapped people.

"Its five years since the court orders, but the BMC has done nothing to evacuate all these 499 unsafe (C1) buildings and demolish them".

An eyewitness said the building collapse felt like a quake.

Mr Talpade said the families were asked to vacate the dilapidated building some time ago but they continued to live there. A team of the National Disaster Response Force (NDRF) also reached to help in rescue work.

-According to preliminary information, the building is over 100 years old.

-After the collapse, a part of the building was left standing.

Donald Trump tells Iran to 'get out of Yemen'
But this was a misreading of the 2015 JCPOA, which was pushed not only by Europe but also by Russian Federation and China. 7/17/2019

Qualcomm Upgrades Snapdragon 855 With Speedier 'Plus' Version
ASUS has already confirmed that the ROG Phone II will sport a 120Hz display , up from 90Hz on the first-gen handset. The previous generation ROG Phone uses the Snapdragon 845 (clocks up to 2.96GHz). 7/16/2019

Hongmeng OS developed mainly for IoT, not an Android alternative
Huawei has already cancelled the launch of its latest laptop in the USA as well as divesting its undersea cable business. In China, Huawei had recently announced the pre-sale of the nova 5 which is priced at 2,749 Yuan (RM1,641). 7/16/2019