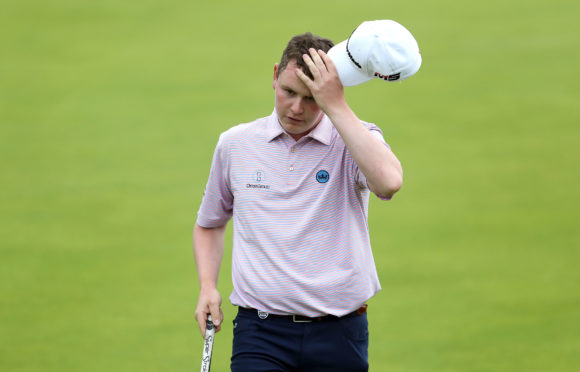 Stanley said he hasn't apologized to MacIntyre and doesn't feel he needed to be "schooled on the rules of golf".

Kyle Stanley of the United States plays out of the rough on the 10th hole during the third round of the British Open Golf Championships at Royal Portrush in Northern Ireland, Saturday.

Stanley did not give the traditional shout of "fore" despite his ball heading towards the spectators, and it resulted in a direct hit on the mother of Greg Milne, who is MacIntyre's caddie. I mean, everyone to the right of that ball, they knew it was coming. I'm not really sure why [MacIntyre] chose to make such an issue about it.

"There's a few things I wasn't happy about today", MacIntyre told reporters Friday. It's unfortunate it ended up the way it did. So I'm surprised it's kind of come to this point.' The 31-year-old added that he would not be seeking anyone out to apologise, and he did not appreciate MacIntyre confronting him as they walked down the 17th hole. "He left out quite a few details so I wouldn't say it was an accurate description of what happened". "It certainly was not my intention to put anyone in harm's way".

"When you tell your story you've got to make sure you've got all the details and from what I read last night he didn't do that".

"My caddie yelled "Fore" about a second after it came off the clubface", Stanley said.

"I wouldn't say heated, we talked about it briefly", he said. 'No one told me I hit anybody. "He didn't really like my response". "That's the first thing you do and that's what I did but no one told me I hit anybody", he said, adding the first time he heard he had hit someone was in the scorer's trailer afterwards. I was surprised. I was caught off guard that it even came up, really. You get up there and ask if everybody is OK, and that's what I did. I just explained to him my side of it. And we expect them to shout "fore".

The incident comes just six weeks after the PGA Tour issued a memo to players, reminding them about warning spectators when there is a danger of hitting someone.

The criticism of Stanley brought the lack of players calling "fore" into focus again, after controversies with several players on the PGA Tour.

Stanley accused the lefthander of not telling the entire story. "You know, when you talk about somebody playing within the boundaries of etiquette in golf, that's kind of a touchy situation", he said.