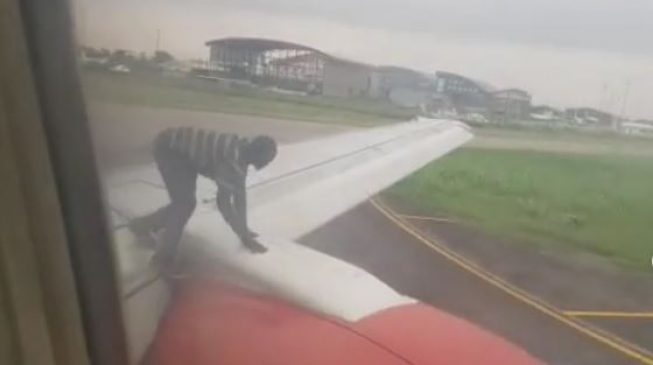 Passengers onboard the Port Harcourt-bound flight panicked after the man prevented the plane from leaving the Murtala Muhammed Airport in Lagos.

The video also showed that the man illegally climbed the aircraft wing and deposited the bag inside one of the engines.

Nigerian aviation authorities say an intruder who climbed onto the wing of a commercial plane that was preparing to fly from the country's busiest airport has been detained.

As the plane was waiting for clearance from air traffic controllers to takeoff, the Pilot in Command spotted an unidentified man on the tarmac, who began climbing toward the wing of the aircraft.

After radioing the tower to inform them of the man, the pilots shut the plane's engine down while officials rushed to the scene.

Captain Yadudu, at a briefing in Kano on Saturday in reaction to the incident, said Adamu is now with the Airport Police Command and the authorities consider it a serious security breach.

The incident occurred Friday on an Azman Air flight in Lagos.

"The suspect identified as Usman Adamu, a Nigerien in origin and who claimed to reside in Iyana Ipaja, on the 19th of July was reported to have appeared at the domestic end of the taxiway and attempted to gain access to the aircraft while it was taxying to the holding point".

"She said:"'The current arrangement is aimed at ensuring an efficient and thorough investigation towards the recovery and sustenance of the airport's proactive security integrity.

She said an investigation to ascertain the remote and immediate causes of the incident had commenced.