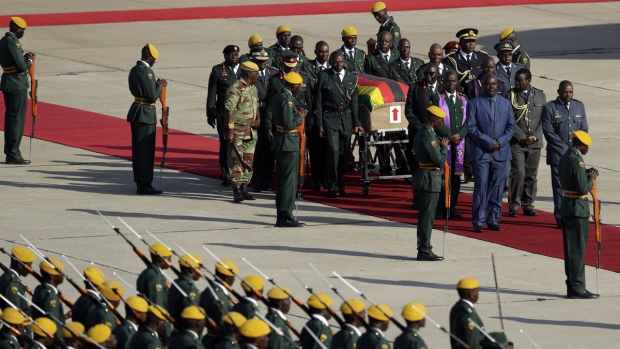 There appears to be a row between the government and the family of former Zimbabwe president Robert Mugabe as to where the deceased leader should be laid to rest.

The book of condolences will be available at the Zimbabwe embassy in Pretoria and the country's two consulates in Johannesburg and in Cape Town. The outspoken former president ruled the southern African nation for 37 years until he was ousted in November 2017.

The Mugabe family publicly invited all Zimbabweans to go to the Harare airport to welcome the former leader's remains, according to an announcement on state media but so far about 100 gathered at the airport, singing songs praising Mugabe.

Mugabe died on Friday at the age of 95 in Singapore, where he was receiving medical treatment.

When pressed on where Mugabe would be buried, Leo Mugabe was non-committal.

Amid the drama and confusion, the straight-talking chairperson of the Zimbabwe National Liberation War Veterans' Association (ZNLWVA) Christopher Mutsvangwa accused members of Zanu-PF's vanquished Generation 40 (G40) faction yesterday of trying to use where Mugabe will be buried as a "desperate bargaining" weapon to get amnesty from President Emmerson Mnangagwa.

"He was the father to all of us, so I came to pay my last respects", said Francis Matongwa, 16, who came with his mother.

Following his death, Mnangagwa announced Mugabe had been declared a "national hero", flags flew at half mast across Harare and news of his passing was splashed across newspaper front pages.

But most of Zimbabwe's national heroes who fought against the minority white minority are buried at the Heroes Acre shrine in Harare.

It was reported that in some parts of Zimbabwe, burials of chiefs are a secret affair and people are only told the resting place afterward.

His official state funeral will take place at the 60,000-seat venue.

"Mugabe's sacrifices, especially in struggling for the political and economic emancipation of his people, will always be remembered by posterity", said Nigerian President Muhammadu Buhari.