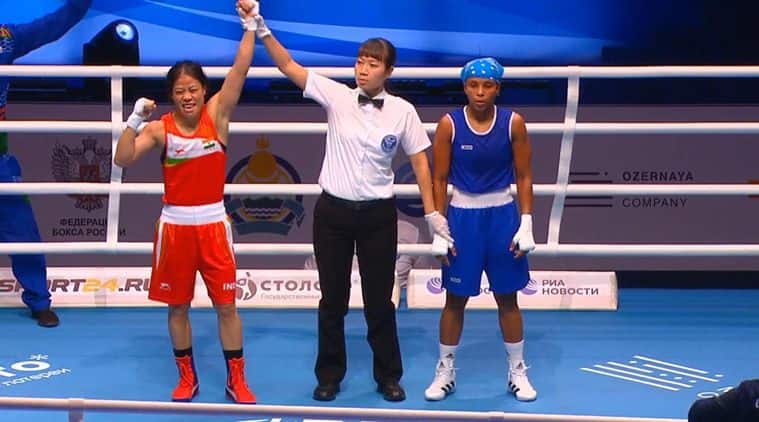 After Mary Kom and Manju Rani assured India of medals at the AIBA World Boxing Championships, Jamuna Boro and Lovlina Borgohain have added two more medals to the country's tally by reaching the semi-finals in their respective categories in Ulan Ude in Russian Federation.

She was tied on seven with Cuban men's legend Felix Savon after winning the gold in the 48kg category previous year.

Earlier in the day after entering the semis, Mary Kom had said: "I am quite happy after winning the quarterfinal". "It was a good bout for me and I will now try to improve on this performance in the semis".

Awaiting her in the semifinals on Saturday, after a rest day on Friday, is second-seeded Turk Busenaz Cakiroglu, the reigning European Championships and European Games gold-medallist. Boro will take on top seed and former Asian Games bronze-medallist Huang Hsiao-Wen of Chinese Taipei. Explaining her quarterfinal bout against Victoria, Mary Kom's personal coach, Chhote Lal Yadav, told TOI that his ward fought a tactically and technically superior fight, focussing mainly on her speed.

For Rani, her next opponent is going to be Thailand's Chuthamat Raksat, who upstaged fifth seed Yuliyanova Asenova.

Lovlina (69 kgs) is also in the hunt for a medal, and she will be looking to do even better than winning the bronze medal she won past year in New Delhi.

Mary Kom, chasing her first world medal in the 51 kg division, used her experience to great advantage and defended brilliantly against the Rio Olympic bronze medallist.

She continued to thank her supporters and felt like her "job is not yet finished".

Mary has six gold medals and a silver at the World Championships.

This 365 days by myself, she gained gold medals at the India Beginning in Guwahati and President's Cup in Indonesia.

"I have never fought her but then I fought my past two rivals also for the first time here".