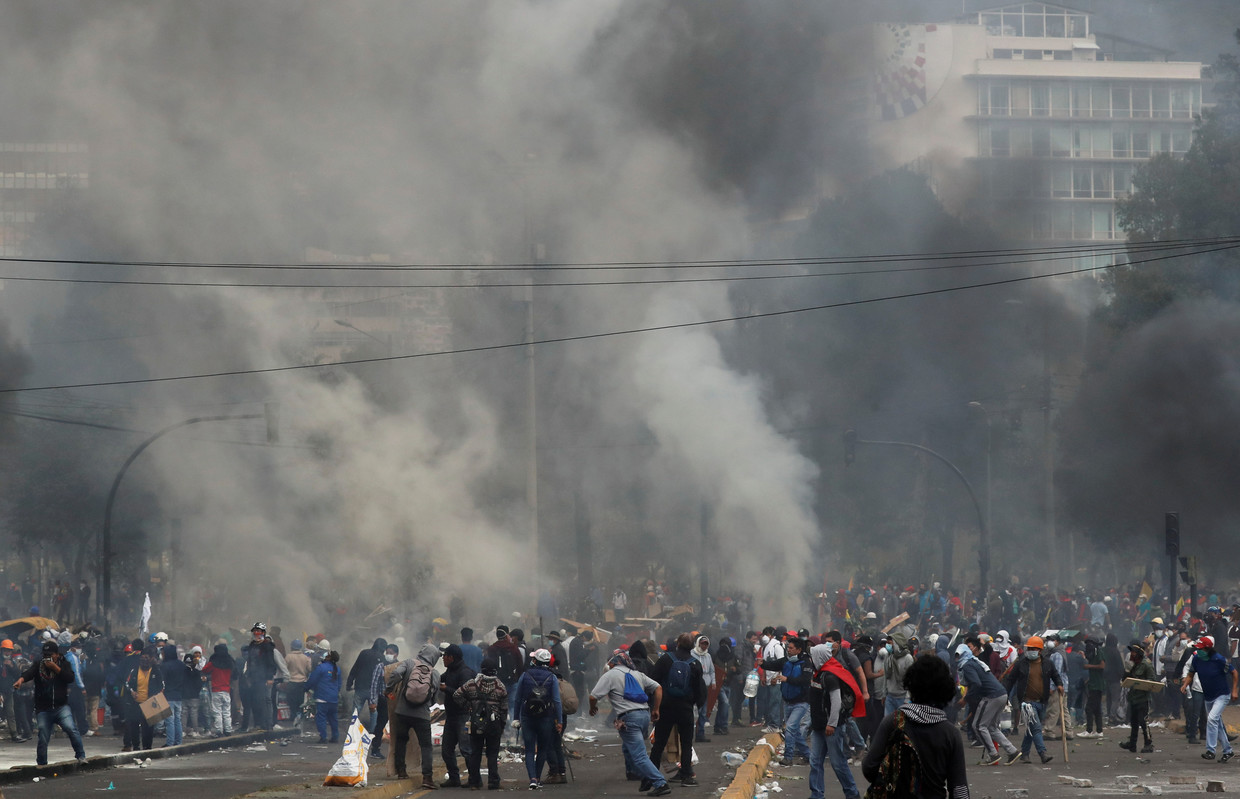 Ecuador's government ordered the first curfew in about four decades in the capital after another day of violence which saw arson attacks on a TV station and a government office.

The offices of the newspaper El Comercio in southern Quito were also attacked, with the building's security guards were seized and briefly bound before police arrived and drove off the assailants.Police also halted the attack on Teleamazonas.

This was in addition to the state of emergency Moreno had declared on October 3, deploying some 75,000 military and police, in addition to imposing an additional curfew in the vicinity of government buildings.

Minutes after that tweet Saturday afternoon, Leonidas Iza, a Quechua leader from mountainous Cotopaxi province, told Ecuavisa television that "we have asked for minimal conditions for dialogue", including what he called an end to government violence against protesters.

The announcement came after indigenous leaders said they were willing to meet with administration officials and Moreno offered possible concessions in the economic package that sparked the protests, though he didn't retract his decision to remove fuel subsidies.

Moreno said the curfew will start at 3 p.m. local time (2000GMT) to "facilitate the use of public force in the face of intolerable excess of violence", Venezuelan TV channel teleSur reported.

As the two sides made progress toward compromise, violence was spreading.

At least seven people have been killed, several hundred wounded and more than 1,000 people arrested in the unrest since it began on October 3, according to the ombudsman's office, which monitors conflicts.

Valencia said Ecuador suffered a "massive" attack on constitutional order, though the country isn't in need of external help to deal with the crisis in Quito.

CONAIE said Saturday it has reconsidered and is now willing to meet face to face with Moreno to talk about the "cancellation or modification" of that and other economic reforms agreed with the International Monetary Fund. The cancellation of fuel subsidies then led to a huge spike in gasoline and diesel prices in Ecuador. Panic and speculation sent prices soaring, with costs of some products doubling or more.

Ecuador's indigenous people, wracked by poverty and underserved by government programs, were infuriated. Thousands from disadvantaged communities in the Amazon and the Andes have traveled to Quito where they are spearheading demands that the subsidies continue. "It needs to be with the Ecuadorian folks", one of many protest leaders mentioned. Some had black face paint and hand-carved wooden spears that poked above the indigenous demonstrators who've taken over the sprawling state-run complex known as the Casa de la Cultura.

"We insist on the need for a direct and public dialogue on Decree 883 for its repeal or revision", Conaie said in a statement.

Rivadeneira belongs to the party of former President Rafael Correa, whose allies have been accused of stirring up unrest by President Lenin Moreno.