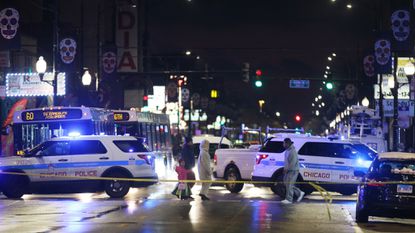 A 7-year-old woman dressed as a bumblebee for Halloween was reportedly shot within the neck whereas trick-or-treating in Chicago on Thursday evening.

The target, who was found a block away, was struck by a bullet in his hand and was "uncooperative" with police.

The girl was trick-or-treating with her dad at 5:30 p.m.in Chicago's West Side neighbourhood when police say a gang-related dispute put them in the line of fire.

Alioto said the child is "fighting for her life".

Lara said she rushed the little girl and her family inside the cellphone store where she was working.

The girl was shot in the neck and chest area, and was taken to Stroger Hospital in a critical condition, police Sgt. Rocco Alioto said.

A girl who was out trick or treating has been hit by a auto which had been shot at on Merseyside.

The girl was brought into the cell phone store and had pressure put on her chest to help stop the bleeding. She was holding my hand for three minutes and then she let me go.

"I was pressing on her and calling her name so she won't close her eyes", she said. "I have kids - I would go insane if something happened to my kids".

A day before Halloween, an earlier shooting of a child resurfaced in the news when a jury acquitted a man who was charged with first-degree murder in the 2014 death of an 11-year-old girl who was shot while inside a house at a slumber party.

A juvenile identified as a person of interest in the shooting was taken into custody today, and detectives were interviewing the individual, Mr Guglielmi said.

In a tweet, Chicago police representative Anthony Guglielmi said the young girl was believed to be an unintended victim.

The shooting occurred as police have been battling gun violence in the city.