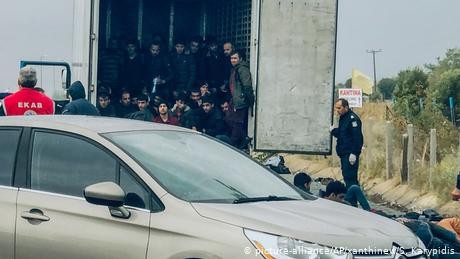 A group of 41 migrants were reportedly found alive in a refrigerated truck in Greece, police were quoted by news agency AFP as saying on Monday.

The migrants, a lot of them Afghans, were not injured, one of the officials said, stating that the refrigeration system had not been turned on.

Officers stopped the truck for a routine check on a motorway near the northern city of Xanthi on Monday.

The migrants, of obvious Afghan origin, had been largely in good situation however seven obtained first support in hospital, the police mentioned.

The Guardian and local newspaper Kathimerini reported the truck driver is of Georgian nationality. The driver of the bus Maurice Robinson, 25, from Northern Ireland was charged with manslaughter and people trafficking.

Greece is buckling under the weight of the biggest resurgence in arrivals of migrants and refugees since 2015.

The truck is believed to have crossed the border into Greece from Turkey.

The numbers of children travelling alone have also increased, with around 1,000 minors arriving since July, according to the Greek labour ministry.

The conservative government that came to power in July has vowed to move up to 20,000 off the islands and deport 10,000 people who do not qualify for asylum by the end of 2020. A lot of them were in a good condition when rescued, stated a report.