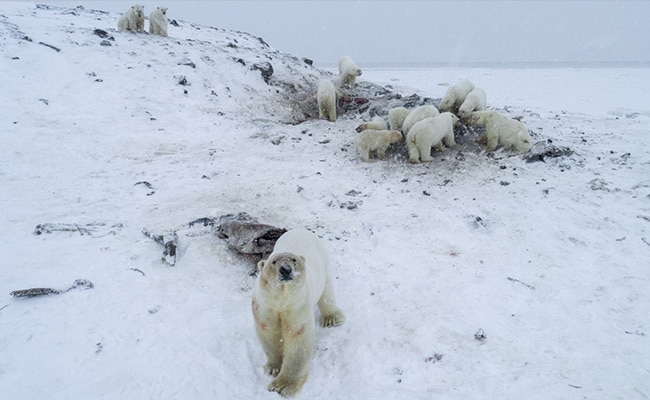 This handout photo taken on 3 December 2019 and released by the World Wildlife Fund - Russia (WWF-Russia) shows polar bears outside the village of Ryrkaypiy in the Chukotka region.

The polar bears are eating the carcasses of walruses that have remained on the village's shores since the fall, the Russian branch of the World Wide Fund for Nature (WWF) said Thursday in a statement.

The World Wildlife Fund (WWF) said local residents volunteered to assist the bear patrol in protecting the town, which has cancelled a number of seasonal events.

The animals were "both adult and young. there were females with cubs of different ages", she said, adding that nearly all of them appeared to be thin.

Anatoly Kochnev told Tass news agency that polar bear visits are increasingly frequent - and that just five years ago, only about five bears got close to the village.

Higher than usual temperatures are causing ice to melt, which is affecting the bears' hunting habits, according to the WWF.

Mikhail Stishov, coordinator of WWF-Russian projects for the conservation of Arctic biodiversity, said that "if the ice was strong enough, the bears, or at least some of them, would have already gone to sea, where they could hunt for seals ... in the meantime, they will look for food along the coast".

"Similar situations are becoming the norm".

Experts described the polar bears seen outside the village of Ryrkaypiy as skinny as the animals migrate past the remote Siberian settlement.

Almost 60 polar bears have been stranded on the Arctic coast near a remote village in Russia's Far East after warm winter weather hampered their hunting routine.

It is the second year the village has faced dozens of polar bears on its doorstep, but locals say this year there are more bears than ever.