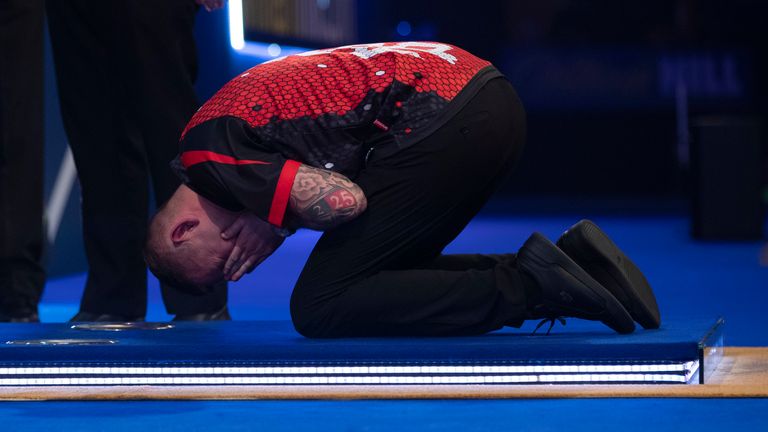 Peter Wright knocked out one of the tournament favourites in Gerwyn Price in the semi-finals of the 2020 PDC World Championship as he reaches the final for the second time in his career.

Both men have apologised for their behaviour as veteran Wright saw off Price 6-3 in an ill-tempered clash at Alexandra Palace on Monday night.

Wright was unimpressed with what he saw as over-exuberant celebrations from Price, and the pair did not shake hands at the end of the match.

Afterwards, "The Iceman" - who did not speak to the media - took to Twitter during the early hours of Tuesday morning to say it was his rival who had been "out of order".

Wright, meanwhile, also apologised directly to Price for his part in the fall-out, after a message from the Welshman had been passed on via Wright's wife, Joanne.

Van Gerwen was unconvincing in beating England's Nathan Aspinall 6 - 3 as he seeks his fourth world crown.

The other semi-final was a tense affair and there was no love lost between seventh seed Wright and third seed Gerwen Price from Wales as they battled it out for a place in the final.

Price had provided extra needle ahead of the contest by insisting he would win the first two sets, prompting Wright to tap his opponent on the arm and attempt to speak to him after claiming the opening set.

"But he will be playing a different Wrighty tomorrow, and this Wrighty will be up for MvG".

"There's no mental block against Michael, even though I should've beaten him in a few finals".

"I'm older and wiser than I was six years ago, I didn't feel ready to be World Champion then but I do now".

'I think your class and proved to the whole world you are and you and your family have gone through so much s*** like we have.so I hope we can still be friends as I would still class you as mine'. I have matured after all these years.

"Most of the time when he [Wright] plays me, he sort of blows it up, misses darts at doubles. That is a good thing for myself", Van Gerwen said.

"I hope I can play a little better than I have been doing so far in this tournament and I am looking forward to the final". He added: "I apologise for not shaking his hand, it's not a rule, but should have bit my tongue, done it and walked off".

Marvel President Kevin Feige Unveils Hiring Process For Filmmakers, Details Inside
Kevin Feige did not drop any names but said that he wanted to cast an actor who is way better than the one who let the role go. Here's hoping that Marvel continues to explore their pantheon of otherworldly heroes and villains as time marches on. 1/02/2020

New iPhone display maker will loosen Samsung's grip on Apple
Samsung's hold on Apple's OLED business for the iPhone could be further eroded as a new display maker enters the supply chain. The focus, meanwhile, may shift to the iPhone SE2 or the iPhone 9, likely to be the first launch in 2020 for Apple . 1/02/2020