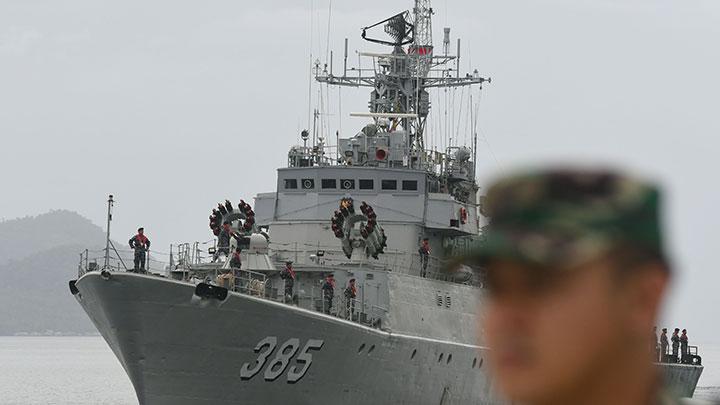 Indonesia's President Joko Widodo talks to Indonesia's Maritime Affairs and Fisheries Minister Edhy Prabowo during a visit in Natuna, Riau Islands, Indonesia Jan. 8, 2020 in this photo taken by Antara Foto. "I think we must pursue persuasion in matters of politics and other things we face", said the Gerindra member.

The Jakarta-Beijing dispute over the Natuna Sea goes back to March 2016 when Chinese coast guards attacked an Indonesian patrol vessel for illegal fishing following an Indonesia interception of a Chinese-flagged fishing boats in the area.

The Chinese ship stopped over on one of the islands in the Spratly group, where China had refueling facilities, local reports said, citing data from Marine Traffic, a maritime intelligence provider with a website that tracks ships.

Speaking on the deployment of the vessels, Commander Fajar Tri Rohadi said on Monday: "We already have four warships there, so tomorrow there will be eight warships in the waters".

Indonesia is not a party to the dispute in the South China Sea where Beijing's claim to the vast waterway has encroached on those of Brunei, Malaysia, the Philippines, Taiwan and Vietnam.

"If they don't leave, we want to persuade them so they understand the Indonesian law".

This followed the discovery of two Chinese coast guard vessels, along with around 60 Chinese fishing boats, in Indonesia's EEZ near the Natuna Sea on Dec 19 and 24.

He noted that the diplomatic spat is between Jakarta and Beijing over maritime rights in the southern reaches of the South China Sea.

Despite the comments from the Indonesia government, China has persisted with its claim that the waters are theirs and are a part of Beijing's nine-dash line policy.

Indonesian Vice Adm. Yudo Margono, chief of the Joint Regional Defense Command, told reporters on Sunday that about 30 Chinese ships had been sighted in Indonesian territory.

President Joko Widodo visited an island in waters disputed by China on Wednesday to assert Indonesia's sovereignty amid a standoff between Indonesian and Chinese vessels.

China said its fishermen's activities in the waters were "legal and legitimate".

On Monday, Indonesia said it was mobilising fishermen to the northern Natuna region and had deployed several naval ships.

"During the negotiation of UNCLOS since 1970s there is no record showing discussion on historic rights, 9DL, relevant waters, except historic bays and historic title for delimiting territorial sea", Agusman said, adding, "In 1980 Indonesia declared its EEZ and encroaching-known later- as 9DL, and no Chinese protest recorded".

Iran's supreme leader in tears as huge crowd mourns Qasem Soleimani
The friction is rooted in the 2018 USA decision to withdraw from a nuclear deal signed in 2015 between Iran and world powers. American political analysts do not expect the USA tensions with Iran will turn into a full-fledged war. 1/09/2020