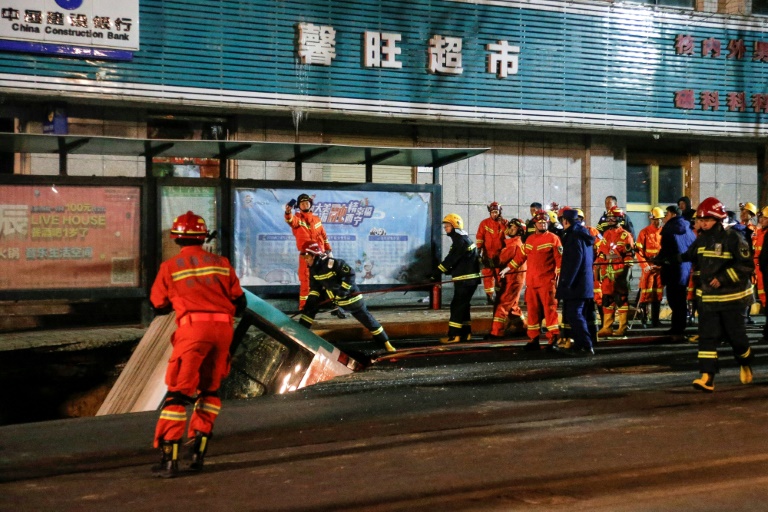 Search and rescue work was under way and the cause of the accident was under investigation, the state-run CCTV broadcaster said.

The cause of the accident is under investigation.

At least 6 people have died. and The incident also wounded 16 people who are in a stable condition now. A total of six bodies were found and 16 people are being treated in hospital, the Xining municipal government said at a news conference on Tuesday morning.

Additional footage obtained by The New York Times shows how the bus slowly sunk into the hole until it eventually stood entirely vertical.

The collapse of the road was captured on closed-circuit television, as the ground also gave way underneath pedestrians trying to help the bus passengers.

It remains unclear how many people were inside the bus at the time of the incident.

The local emergency office said the bus had been lifted out of the collapsed 860-square-foot section it fell into.

As passengers appear to be boarding the bus, a hole suddenly opens up in the road, swallowing the front of a bus and a signpost, as well as what appears to be several people stood on the sidewalk.

Sinkholes are not uncommon in China and are often blamed on the extensive construction that has come with its rapid economic development in recent years. A sinkhole swallowed up three subway trains in Xiamen and another subway line fell into a hole in Guangzhou last month.

The hilly city of Xining is the capital of Qinghai province, one of China's poorest regions, sitting atop the Tibetan Plateau.