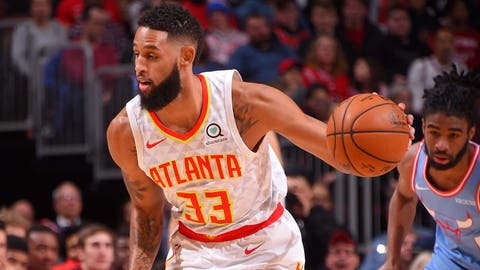 Minnesota, meanwhile, is sitting at 15-25, just 3.5 games back of the eighth seed Memphis Grizzlies.

Minnesota Timberwolves' Jeff Teague is guarded by Mason Plumlee of the Denver Nuggets on December 20, 2019 at the Pepsi Center in Denver, Colorado.

The Timberwolves also dealt shooting guard Treveon Graham, creating a roster space for potential other transactions prior to the February 6 trade deadline.

Minnesota Timberwolves President of Basketball Operations Gersson Rosas today announced the team has acquired guard Allen Crabbe from the Atlanta Hawks in exchange for guards Jeff Teague and Treveon Graham. Teague is in the final season of a three-year, $57 million deal.

Teague previously played for the Hawks before he was traded to the Indiana Pacers.

According to Wojnarowski, the Hawks had been "scouring the marketplace for a backup point guard to ease the burden" on Trae Young, who is averaging a little more than 35 minutes per game.

Teague spent parts of three seasons in Minnesota, averaging 13.4 points and 7.1 assists per game. He played in only 42 games last season and was moved into a reserve role two months ago, with Shabazz Napier and Jarrett Culver taking the turns at point guard.

Graham scored an average of 5.2 points for the wolves in 33 games this season, who acquired the 26-year-old in a summer deal with Golden State after landing there briefly on a deal with Brooklyn. This season, his overall 3-point percentage has dropped to a career-low 32.3.