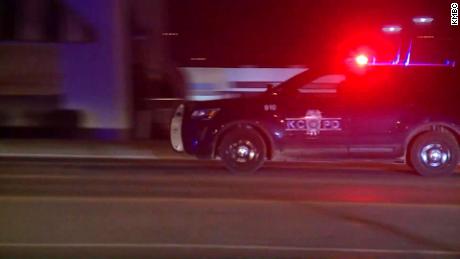 One female was found dead in the bar's parking lot.

Two people were killed and 15 others were injured in shooting at a Kansas City nightclub Sunday.

Two people died and at least 15 others were injured in the shooting that happened outside 9ine Ultra Lounge around 11:30 p.m. Police think the gunman was one of the two people killed after being shot by a security guard. Police believe the dead man was the shooter and the only suspect.

Three of the victims are in critical condition.

Police said the next update from them will likely be the identification of deceased victims once the next of kin have been notified.

Kansas City police Capt. David Jackson told news outlets at the club that responding officers found "a chaotic scene" and had to call in help from around the city, The Associated Press reports. The shooter started firing into a line of people waiting to get inside the bar, Jackson said.

Several areas were blocked off as police continued the investigation early Monday. The shooter was shot by an armed security guard, police said.

Hours before the shooting, the Kansas City Chiefs won a spot in the February 2 Super Bowl with a 35-24 victory at home over the Tennessee Titans, earning the team its first return to the league championship game in 50 years.

"Tonight officers were dispatched to the area 40 Highway and Nolan road on a shooting", Jackson said.