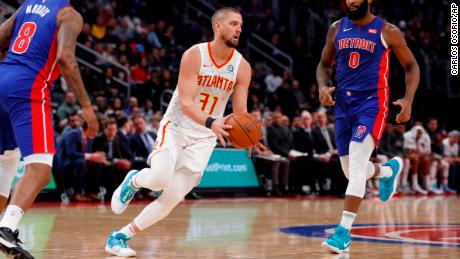 The driver that struck Parsons was arrested for drunk driving, the statement reads.

Morgan & Morgan, which is representing Parsons, said in a statement the 31-year-old "suffered multiple severe and permanent injuries including a traumatic brain injury, disc herniation and a torn labrum".

As well as a severe brain injury, Morgan & Morgan added that Parsons, in his ninth season in the National Basketball Association, had suffered injuries to his neck and shoulder.

"Chandler is having a hard time accepting the consequences of the defendant's reckless conduct on the roadway", Morgan & Morgan said. The attorneys say the driver, who was not identified, is responsible for "seriously injuring and potentially ending Mr. Parsons' career as a professional athlete".

"Parsons was involved in an automobile accident this afternoon following practice", the Hawks said last week.

The team has not disclosed any further details about his injuries or the crash.

"Chandler is having a hard time accepting the consequences of the defendant's reckless conduct on the roadway", the statement added.

Parsons signed for the Hawks in 2019 after previous stints with the Memphis Grizzlies, Dallas Mavericks and Houston Rockets.

The statement said Parsons is now working with doctors and his "ability to return to play is unclear".

"Our focus right now is on helping him make a full recovery". In college, Parsons was named an NCAA All-American while playing for the Florida Gators.