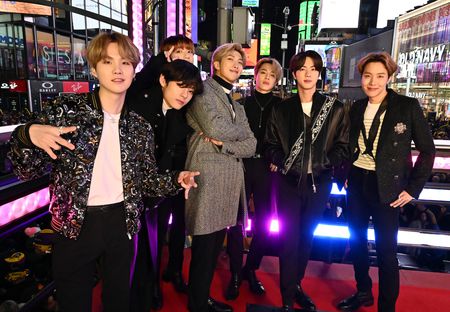 This time the group will launch the tour with four concerts in their native Seoul, South Korea at Olympic Stadium in April before heading to North America.

After a month of rumors, K-pop megaband BTS have finally confirmed a new world tour starting in April. They will make their first stop in the United States on the west coast in Santa Clara April 25 and 26.

They will play Rogers Centre in Toronto on May 30 and 31. After that, seven-member group performs in Japan and Europe.

The tour will commence following the release of the band's fourth studio album, Map of the Soul: 7, on February 21. The record will follow Korean-based albums Love Yourself: Tear from 2018 and 2016's Wings.

In November, BTS became the first K-pop act to win the Favorite Duo or Group award at the American Music Awards, also picking up nods for Favorite Social Artist and Tour of the Year.

"MAP OF THE SOUL: 7" lands on February 21st. What or where will they be performing on that date is the big question. Fans must purchase an official ARMY fan club membership in order to enter a raffle to access a selected allotment of floor seats and early access tickets.

Meanwhile, fans in other countries should watch out as Big Hit Entertainment will soon release the second wave of dates and stops of BTS' newest world tour.

Ahead of their Map of the Soul: 7 album release, iHeartRadio-in partnership with The CW and Hot Topic-announced a special live show with BTS on January 27.