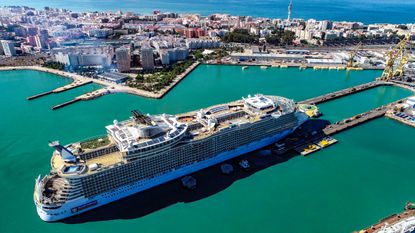 We are sad to report that a 46-year-old man from Naples, Florida has died after jumping overboard the large Oasis of the Seas cruise ship which is operated by Royal Caribbean.

The passenger went overboard from the deck of the Oasis of the Seas ship, at around 7.40 p.m. local time on Wednesday, CBS News reporter David Begnaud wrote on Twitter.

EFE, a Spanish news wire, reported Andrew Campbell was the man who went overboard and that he was a Canadian tourist.

The ship was docked in San Juan Bay when the incident occurred, Coast Guard spokesman Ricardo Castrodad told the Associated Press. Our thoughts go out to the man's family and friends during this very hard time.

No further details about the passenger were released.

The coast guard subsequently set up a 300-yard safety zone around the ship and prevented two other cruise ships from leaving.

A representative from the U.S. Coast Guard did not immediately respond to PEOPLE's request for comment.

West Hollywood based Atlantis Events advertised the cruise as "one of the biggest cruise ship in the world, the Oasis of the Seas, with a capacity of over 5000 guys!" Royal Caribbean had served the young man over 20 alcoholic drinks in the hours prior to the guest going into the water.

Oasis of the Seas is now being used for an annual cruise called Atlantis, which caters to the gay community.

A spokesperson for Royal Caribbean declined to comment on the incident.