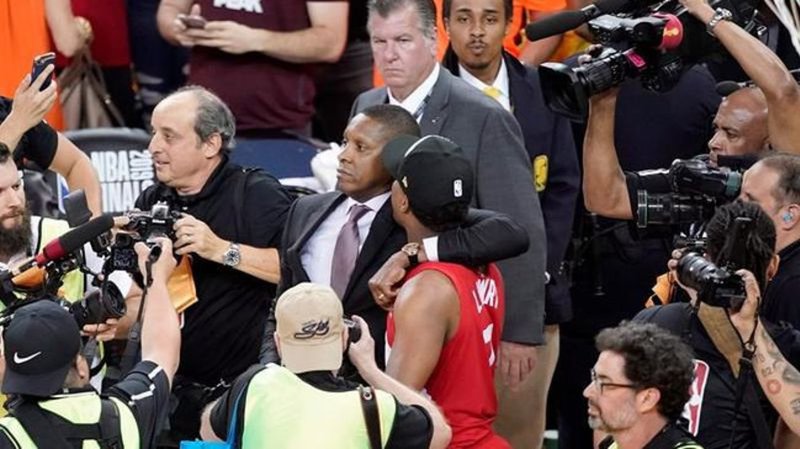 "Plaintiff is entitled to recover all damages resulting from Defendants' acts, including compensatory damages, general damages, personal injury damages, past and future medical expenses, attorney's fees, costs, and any other damages the Court deems appropriate".

The suit alleges that Ujiri struck the officer - Alan Strickland, who was identified in the lawsuit for the first time since the incident took place - in the face and chest with both fists as he attempted to reach the court in the wake of Toronto winning the first National Basketball Association championship in franchise history.

Strickland claims that he "suffered injury to his body, health, strength, activity and person, all of which have caused and continue to cause Plaintiff great mental, emotional, psychological, physical, and nervous pain and suffering".

A rep for the Raptors ownership group told us they were aware of the lawsuit, but had no comment.

Several bystanders intervened and Ujiri got onto the court without displaying any credentials.

According to previous reports, Strickland stated that Ujiri did not show proper credentials to go onto the area of the court he was trying to access.

Oakland police investigated the incident, portions of which were captured on video.

The Alameda County Sheriff's Office placed him on medical leave after the incident, a spokesperson for the sheriff's office said at the time. Ujiri had not yet responded to a request for comment.

In a lawsuit filed on Friday in Sacramento at a California United States District Court for the Northern District of California, Alan Strickland filed a complaint on six counts and has asked for a jury trial.

In October, a spokesperson for the Alameda District Attorney said no charges would be filed against Ujiri stemming from the incident, although Ujiri did attend a meeting with the district attorney "focused on matters that we believe merited constructive, structured mediation and conflict resolution and were better handled in a setting outside of the courtroom", a spokesperson for the Alameda District Attorney told the San Jose Mercury News.

The deputy claimed at the time that Ujiri pushed and punched him, leaving him with a concussion and a jaw injury.