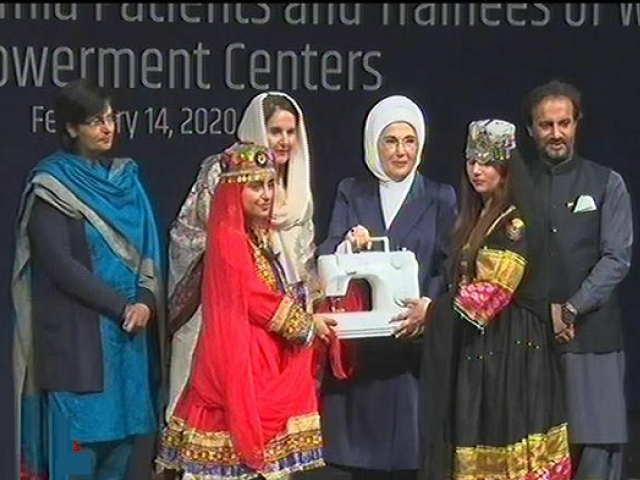 "Depriving Kashmiris of their freedom and usurping their rights is not in anybody's interest", Erdogan said in his speech, referring to India's moves to revoke the special status to Kashmir as well as impose restrictions on communications and the Internet in the region.

Speaking to MPs at a joint session of Pakistan's Parliament on Friday, Erdogan said, "I would like to convey the greeting of 83 million brothers and sisters in Turkey..."

President Erdogan mentioned that Turkey openly defended the just struggle of Kashmiris at the 74th session of United Nations General Assembly in NY and during all meetings of the Organization of Islamic Cooperation (OIC). He thanked Pakistan's for allowing to take over FETO-linked schools in Pakistan by Turkey's Maarif Foundation and also for supporting the "Operation Peace Spring" conducted by Turkey in north of Syria.

The two leader also agreed that Pakistan and Turkey must continue to work closely to counter challenges facing the Muslim ummah, including Islamophobia, the statement added.

Erdogan said Turkey has signed 30 agreements with Pakistan during his visit besides holding crucial strategic dialogues, whereas, both countries will increase its bilateral trade volume up to $5 billion by 2023 which had been decided in Ankara meeting. I am grateful for the hospitality and it feels like home here, he said.

The FATF already has Pakistan on its "grey-list" of countries with inadequate controls over curbing money laundering and terrorism financing.

Erdogan lauded Pakistan's efforts for resumption of peace in Afghanistan with an objective of regional stability.

On bilateral ties rooted in history, he recalled that the Muslims of Subcontinent in 1915, now Pakistan, took rallies in Lahore in support of the Turkish armed forces, defending their Fort in Turkey.

Inviting Turkey to invest in the country, the premier stated that, under his leadership, Pakistan jumped 28 spots on the World Bank's Ease of Doing Business index.

"We will continue to stand by Pakistan in the future, as we did in the past". They also underlined transforming this relation into a strong and dynamic trade and economic partnership.

During their wide-ranging talks, President Alvi extended a warm welcome to President Erdogan and expressed satisfaction over the level of multifaceted engagement between Pakistan and Turkey, according to a press release issued by the President's Secretariat.

A warm welcome was accorded to the Turkish President and First Lady of Turkey Emine Erdogan over their arrival at the presidency. Senior Pakistani officials as well as the Turkish Ambassador to Pakistan were also present on the occasion.

The two presidents also exchanged views on regional and global issues, with President Alvi highlighting Pakistan's efforts for peace and reconciliation in Afghanistan.

Samsung Galaxy Z Flip sold out in the UAE
Available in a single storage variant of 8GB RAM and 128GB internal storage , the 128GB variant is now available for Rs 61,990. If it is the former, Samsung S20 series phones in the Indian market can subsequently get 5G support through a software update. 2/16/2020

Coronavirus: Death Toll Reaches 1,527, Egypt Confirms First Case
The World Health Organization (WHO) said that China is running more than 80 trials to find treatment for the COVID-19. Anyone returning to Beijing must to go into quarantine for 14 days or risk punishment. 2/16/2020

Let's move on from impeachment, visiting U.S. Senators tell Ukraine's leader
He said measures like the Kaine resolution will clarify that it is Congress's responsibility to debate and declare war. In a retaliatory move, Iran fired dozens of ballistic missiles at a major us military base in Iraq on January 8. 2/16/2020

Singapore's largest bank DBS evacuates 300 employees after coronavirus case found
Contact tracing is now being conducted with all employees and others the infected employee may have come into contact with. Visitors pass through a thermal scanner as they arrive the Singapore Air Show on Tuesday, Feb. 11, 2020, in Singapore . 2/15/2020