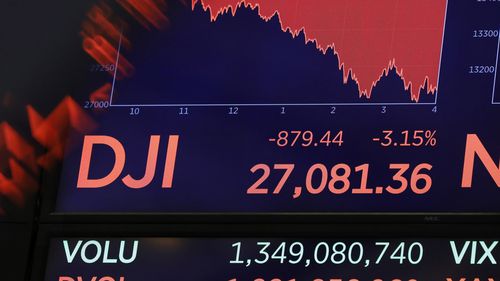 Global stocks, US government bond yields and oil prices tumbled Thursday, extending losses as investors braced for a drop in business activity and corporate earnings following the spread of the coronavirus.

The virus has now infected more than 82,000 people globally and is worrying governments with its rapid spread beyond the epicenter of China.

Among European stocks, Anheuser-Busch InBev SA was one of the worst performers, with shares falling 11.4% after the maker of Budweiser beer reported lower profit for the fourth quarter, blaming higher costs and lost market share.

The price of crude oil fell 3.4%. Meanwhile nations are taking increasingly drastic measures to try and contain the outbreak and the fears over the potential spread in the USA are rising.

Italy has become the center of the outbreak in Europe, with the spread threatening the financial and industrial centers of that nation.

At their heart, stock prices rise and fall with the profits that companies make. "Our reduced profit forecasts reflect the severe decline in Chinese economic activity in 1Q, lower end-demand for USA exporters, disruption to the supply chain for many United States firms, a slowdown in U.S. economic activity, and elevated business uncertainty".

Microsoft Corp dropped nearly 5% after it warned of weakness in PC business due to a hit to its supply chain from the coronavirus, echoing similar statements from Apple Inc and HP.

"This could lead to more near-term market volatility and pressure stock prices further".

Traders are growing increasingly certain that the Federal Reserve will be forced to cut interest rates to protect the economy, and soon. All three indices closed down more than 10% from their recent highs, meaning that they are now in a correction.

Several companies have managed to gain ground in the latest rout of stocks. Medical teleconferencing company Teladoc surged 23.7% and 3M, which counts surgical masks among its many products, rose 3.1%.

Most technology companies weren't able to avoid the crumbling faith investors displayed toward the short term prospects of the USA economy if it's forced to endure a prolonged slowdown thanks to the illness.