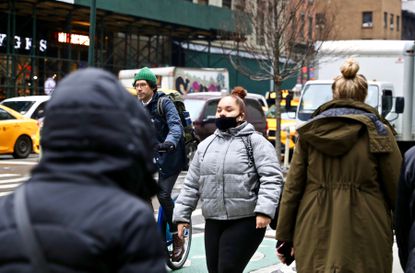 As of Wednesday night, the United States had 60 confirmed cases of the coronavirus, 42 of which were on the ship, according to the U.S. Centers for Disease Control and Prevention (CDC).

California Governor Gavin Newsom and state health officials held a news conference at 10: 30 a.m.to provide an update to the public on the state's response to Novel Coronavirus.

The hospital where the patient is being treated in California described one of the more serious cases of infection seen so far in the USA, according a report in a local newspaper, with the patient arriving after being intubated and put on a ventilator.

A recently announced patient now undergoing treatment at the UC Davis Medical Center in Sacramento may be the first case of community transmission in the USA, but the CDC says it's still possible that the patient may have been exposed to a return traveler who was infected.

"There are probably other cases in the community that we don't know", Blumberg said.

The woman is a resident of Solano County and is receiving medical treatment at UC Davis Medical Center, according to the California Department of Public Health.

A memo sent by the CEOs of UC Davis Health and the Medical Center states that the patient was transferred to its facility on Stockton Boulevard in Sacramento on February 19, and was tested for COVID-19, the disease caused by coronavirus, four days later, on Sunday. However, it is also possible that the patient has been exposed to a traveler who returned and was infected. "Community spread means spread of an illness for which the source of infection is unknown". One of them, who is showing symptoms of illness, has been tested for the virus, but the results are not yet in.

During an interagency call on Wednesday, officials from Health and Human Services (HHS) and the Department of Homeland Security (DHS) discussed the possibility of invoking the Defense Production Act for the manufacture of "personal protective equipment" that can be worn by healthcare workers to prevent infection, according to a DHS official.

The hospital said it is "committed to saving this patient's life", and has put in place upgraded precautions for staff that weren't initially used when the patient arrived.

President Donald Trump has worked to minimize fears about the virus, but on Wednesday he also recommended that schools to start planning for arrival of the COVID-19 virus "just in case".

The number of deaths in mainland China - excluding the semi-autonomous territories of Hong Kong and Macao - stands at 2,747, out of 78,497 cases.

"There is a real concern the availability of this equipment may be limited, in part because of the public buying it in a panic when they don't need it", said Matt Zavadsky, head of the National Association of Emergency Medical Technicians.

Go here for the latest news, information and videos about the coronavirus.

The community of about 100,000 is between San Francisco and Sacramento in Solano County, in the agricultural Central Valley near California's famous wine region. Currently, individuals with flu-like symptoms are only tested for the coronavirus if they have traveled to a country where the virus is spreading. The three students are roommates who had been living in Kearney Hall, and officials do not believe others on campus are at risk, adding that there are no known infections of COVID-19 on campus at this time.

The patients, who were among the recent United States evacuees of the Diamond Princess quarantine cruise ship in Japan, were receiving attention in Contra Costa due to the lack of space in the facilities closest to the base that could adequately isolate them to minimize the risk of propagation. virus. That's an increase of two positive tests since Wednesday afternoon.

"No country should assume it won't get cases, that would be a fatal mistake, quite literally", Tedros said, pointing to Italy, where 17 people have died in Europe's worst outbreak.

Local universities adjust study overseas programs in response to coronavirus
UW-Oshkosh is suspending a spring semester program to South Korea due to warnings about the spread of the new coronavirus . Those returning from Tuscany are required to return to their homes until the conclusion of Spring Break on March 22. 2/29/2020

US To Sign Agreement With Taliban, Mike Pompeo To Attend Deal
The US now has less than 14,000 troops in Afghanistan, but military officials would not confirm the exact number. The US and the Taliban are due to sign an accord this weekend on a US troop withdrawal. 2/29/2020

Tiger Shroff, Sajid Nadiadwala to reunite for Heropanti 2
Blessed and grateful to be carrying forward another franchise with my mentor Sajid sir", the 29-year-old actor captioned the post. While he didn't dive into details of it, the actor is collaborating once again with director Ahmed Khan for his next. 2/29/2020

Joe Biden's Campaign Is On The Line In South Carolina
Amy Klobuchar , too, with the group. "I was originally planning on supporting Joe Biden because he was familiar", said Palmer. The Data for Progress survey showed 34 per cent of SC voters choosing Biden , while 25 per cent said they supported Sanders . 2/29/2020

‘I'm convinced that we will qualify’ - Ronaldo confident of Champions League turnaround
Their next domestic game against Inter Milan is set to be played behind closed doors because of the coronavirus outbreak. It's always hard , but we have the 2nd leg. 2/29/2020

Man United and Wolves discover opponents in Europa League last-16 draw
Below is the draw for the last 16 in full as the first legs will be played on March 12 with the second legs on March 19. Three-time champion Inter Milan were drawn to play Getafe , and record five-time champions Sevilla will face Roma . 2/29/2020