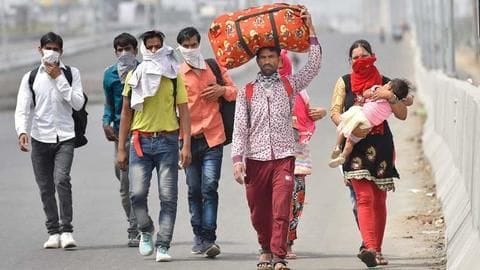 The lockdown has left numerous migrant workers jobless and scared they won't be able to afford food or other essentials, according to the AP.

So far, 40 cases of coronavirus have been reported in the national capital.

Thousands of daily wagers and labourers from Delhi, Haryana and even Punjab reached Anand Vihar, Ghazipur and Ghaziabad's Lal Kuan area after taking arduous treks of many kilometers on foot to take buses to their respective native places.

A family makes its way back home from Dehi trekking hundreds of kilometres during the lockdown. "We have also provided some DTC buses to transport them".

"We have no count of how many of them would have crossed (into Uttar Pradesh) since Wednesday but they keep coming all through the day", a police officer on patrol duty at the border said.

"Many migrant workers feel they have no choice but to walk home".

Puranam said Delhi's homeless shelters are overflowing with people and the state government has made a decision to convert public schools into shelters from Sunday. "I urge people to stay put where they are".

Notably, after the sudden announcement of the lockdown by Prime Minister Modi, migrant workers who were left without jobs, shelter and food were spotted walking towards Delhi-Ghaziabad border as the government had suspended all interstate bus and railway services to contain the spread of coronavirus.