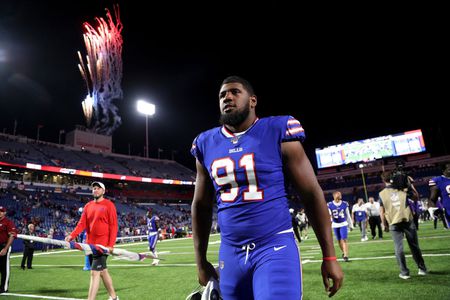 Buffalo Bills defensive tackle Ed Oliver Jr. was arrested Saturday night for Driving While Intoxicated. and to make things worse, cops say he was also illegally carrying a GUN in his truck.

Oliver bonded out of the Montgomery County Jail, according to the jail's records.

A search of the auto turned up a pistol, and Oliver was booked on a weapons charge in addition to the DWI charge.

The 22-year-old was pulled over when authorities responded to a 911 call about a white Ford Superduty pickup driving dangerously in a construction zone.

Oliver is now being held at Montgomery County Jail after being pulled over on State Highway 242. When the police caught up, they found Oliver with an open beer between his legs. Oliver was the No. 9 overall pick of the Bills at the 2019 NFL Draft.

He put together a pretty solid rookie campaign with 5 sacks and 43 tackles.

"We are aware of the situation and we are gathering more information", said the Bills via statement.

According to Mycah Hatfield of Houston's ABC13, Oliver posted bond on Sunday morning and was released.

The NFL's Policy and Program of Substance Abuse points to at least a three-game suspension without pay for a player's first violation of the law involving alcohol.

Google Antitrust Suit Being Drafted by Justice Department
The federal probe of Google reportedly focuses on search bias, advertising and management of its Android operating system. The Federal Trade Commission settled an antitrust investigation of Google in 2013 with a reprimand. 5/18/2020

"Gilead Sciences" remdesivir to be distributed in 127 countries
Roche licensed Hyderabad-based Hetero to make and sell it in the local Indian and other developing markets. Tony Kahle, a COVID-19 patient in San Diego, said Remdesivir saved his life. 5/17/2020