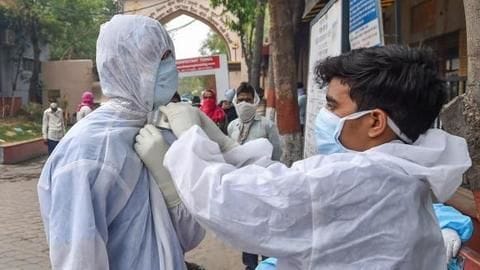 South Korea was reporting about 500 new cases each day in early March but seemed to stabilize the outbreak with aggressive tracking and tracing, which allowed authorities to ease social distancing guidelines.

India is attempting to flatten the curve of the novel coronavirus and is now under an extended lockdown, as some states are continuing to see a steady rise in cases. However, the Union Health Ministry said in the evening that the country's total cases stood at 1,82,143 with 8,380 new infections reported in the last 24 hours.

Lockdown 4.0, which will end on May 31 midnight, has accounted for 47.2 per cent of the total coronavirus infection cases, number crunching from the Union Health Ministry data reveals.

India has now overtaken Turkey as the ninth worst-hit country in terms of total number of cases.

Maharashtra, which has been one of the worst-affected states of the country, has reported 114 new cases of police personnel, and 1 death.

But cases in the greater capital area have been rising steadily again as public activity increases, causing alarm as millions of children have begun returning to school. If the local administration has to regulate movement in wake of a surge in number of COVID-19 cases, it will have to give wide publicity in advance regarding the procedure and restrictions to be followed.

Culture Secretary Oliver Dowden has said there have been 2,445 new infections over the last 24 hours, confirmed through testing.

The nationwide tally now stands at nearly 1.82 lakh while the death toll rose to 5,182. State health minister Rajesh Tope said there were 34,881 active cases in the state.

Manipur has reported 62 COVID-19 cases, Puducherry has 51 cases of infection, Nagaland has recorded 36 cases, while Andaman and Nicobar Islands has registered 33 infections.