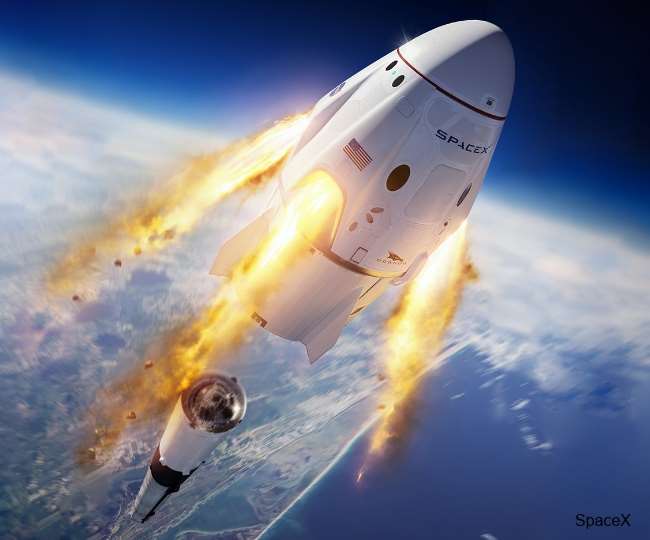 (SpaceX) NASA astronauts Douglas Hurley, left, and Robert Behnken wave as they exit the Neil A. Armstrong Operations and Checkout Building on their way to Pad 39-A, at the Kennedy Space Center in Cape Canaveral, Florida.

The Crew Dragon arrived at the station's Harmony port, docking at 10:16 a.m. EDT (1416GMT) while the spacecraft was flying at about 262 miles above the northern border of China and Mongolia, NASA said.

"Today a new era in human spaceflight begins as we once again launched American astronauts on American rockets from American soil on their way to the International Space Station, our national lab orbiting Earth", Nasa Administrator Jim Bridenstine said.

After last week's failed attempt to launch due to bad weather, Saturday saw the successful liftoff of the SpaceX rocket, owned by Elon Musk's company of the same name.

Behnken and Hurley will stay in the station for up to four months, and will splash down in the sea on their return, a space return the world has not witnessed since the 1970s.

A rocket ship on Saturday successfully blasted off with two NASA astronauts from the U.S. state of Florida on their way to International Space Station (ISS), marking the beginning of new age in commercial space travel.

United States President Donald Trump spoke with Musk, and called him "one of the great brains". They'll join fellow NASA astronaut Christopher Cassidy and Russian cosmonauts Anatoli Ivanishin and Ivan Vagner, who are already on board the International Space Station. "The SpaceX Dragon Capsule has successfully reached low Earth orbit, and our astronauts are safe and sound!"

But Boeing's program has floundered badly after a failed test run late past year, which left SpaceX, a company founded only in 2002, as clear frontrunner. "There's really no major problems". The astronauts took over manual control for a while, firing the thrusters to nudge the position of the spacecraft. If no major problems arise during this test flight, NASA will use data from this flight to certify that the Crew Dragon is ready for routine flights to the space station.

"It's been a real honor to be a small part of this nine-year endeavor since the last time a United States spaceship docked with the International Space Station", Hurley said after docking completed.

Before opening the hatch and entering the station, Behnken and Hurley conducted a series of pressure and leak checks to ensure their safety.