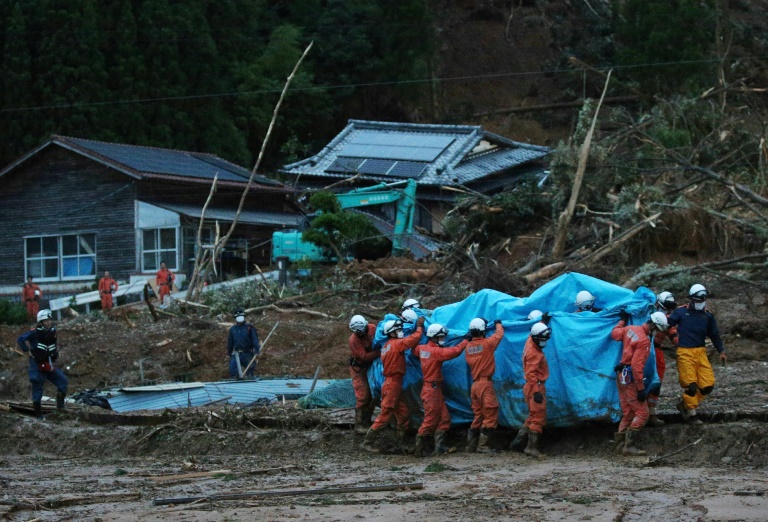 Fourteen of those found without vital signs were at a nursing home in Kuma village, where water and mud gushed into the building.

Kyodo News said 76,600 residents in Kumamoto and Kagoshima were ordered to evacuate their homes.

The banks of 21 rivers across the country collapsed and almost 150 overflowed, flooding nearby areas and causing major damage, including to this bridge over the Chikuma River in Tomi, Nagano. Japanese medical officials declared the victims were in "cardio-respiratory arrest" - a term used in Japan before death can be officially certified.

Kumamoto Gov. Ikuo Kabashima later told reporters that around a dozen residents at a flooded elderly care home in Kuma village were presumed dead after being found during rescue operations, according to Japanese media including NHK and Kyodo News.

The warnings that were issued cover the Kumamoto cities of Amakusa, Yatsushiro and Hitoyoshi, and parts of Kagoshima, including the cities of Isa and Akune. There were also reports that around 10 people could not be contacted in one of the flood-hit towns in the prefecture.

Footage shows a bridge over the Kuma river washed away, with other pictures of submerged cars and houses.

Several people were standing atop a convenience store as they waited for rescuers. They had previously said two were feared dead.

Prime Minister Shinzo Abe said thousands of troops were being sent to Kyushu to help in rescue operations, calling on people in the area to remain on "maximum alert".

Government officials have reported that some 10,000 members of the Self-Defense Force are being deployed to the area to assist with ongoing rescues and flood relief efforts.

Some train services have been suspended in the region, while more than 8,000 households lost power.

Japan is now in its rainy season, which often causes floods and landsides and prompts local authorities to issue evacuation orders.