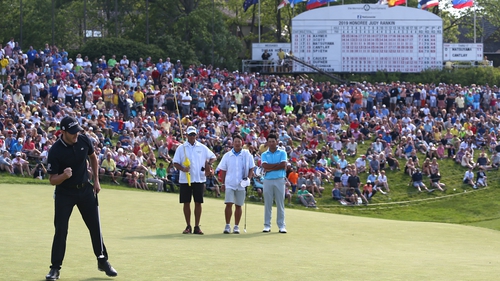 The PGA TOUR announced today the four featured groupings for Thursday-Friday at the Workday Charity Open, to be contested at Muirfield Village Golf Club in Dublin, Ohio.

"I've missed going out and competing with the guys and can't wait to get back out there, " Woods said.

Woods announced his commitment via Twitter on Thursday morning and will play an official event for the first time since February 16 - the final round of the Genesis Invitational, where he shot 77 and finished last among those who made the cut.

This will be only Woods's third tournament of 2020, although he also performed well and proved his fitness in a charity match involving Phil Mickelson in May. The event helped raise over $20million to help with COVID-19 relief.

The Tiger Woods guessing game is over.

The Tour's initial return-to-play protocol involved a mandatory 10-day self-isolation period following a positive test, but it was amended July 1 to a symptom-based model, as outlined by the CDC.

Having started the year in sixth place on the Official World Golf Ranking, his inactivity over the past several months has caused him to slip to 14th.

Aside from the majors - Woods is three away from matching the standard set by Jack Nicklaus - Woods is missing additional incentive to play, with the Olympics and the Ryder Cup postponed until 2021.

Woods has played only three times this season on the PGA Tour, starting with his record-tying 82nd victory at the Zozo Championship in Japan.