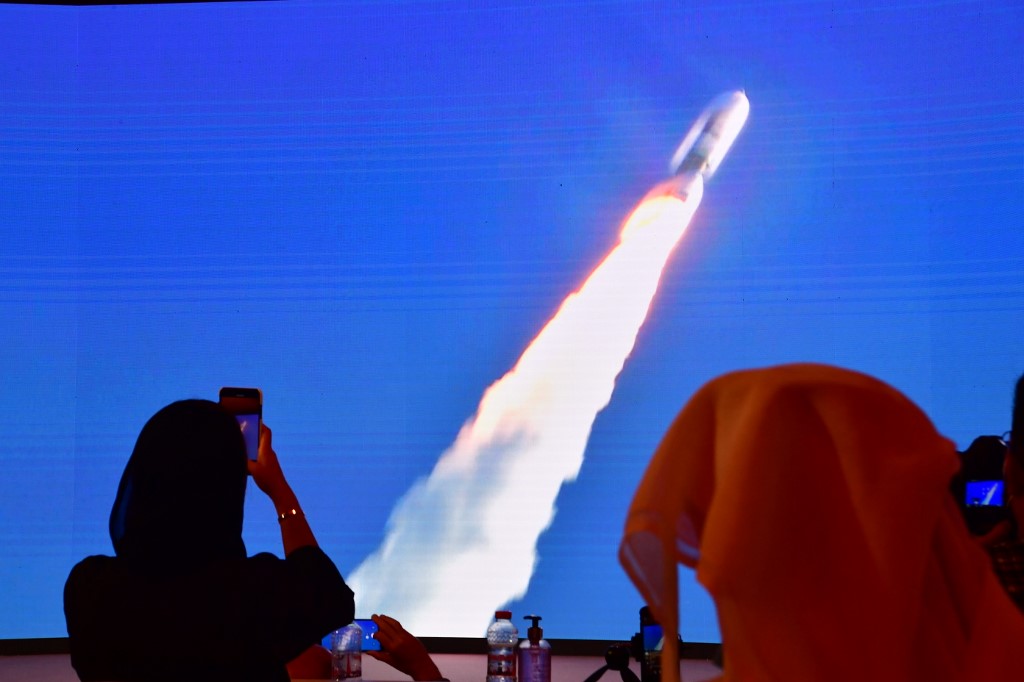 A rocket from Japan carried the first Arab space mission to Mars into space Monday, with the probe dubbed "Hope" successfully separating about an hour after liftoff.

The Hope probe is expected to arrive at the Red Planet in February 2021 and move itself into orbit.

The liftoff of the Mars orbiter was initially scheduled for Wednesday but was postponed due to bad weather at the launch site.

The probe will study the upper atmosphere and monitor climate change while circling Mars for at least two years.

Mr Sharaf said the Mars mission "sends a very strong message to the Arab youth that if the UAE is able to reach Mars in less than 50 years, they could do much more". For the next seven months, it will be flying straight for Mars.

A newcomer in space development, the UAE has successfully put three Earth observation satellites into orbit. Next up is China's Tianwen-1 mission to place a lander and 530-pound rover on the planet. But NASA's Mars 2020 efforts are still in a weird state of limbo, and the mission that just flew skyward on the way to the Red Planet comes from the United Arab Emirates. The Emirates have also pledged to build the first human settlement on Mars by 2117.

The UAE sees this home-grown mission as a way of fostering scientific and technical expertise in the country and in the Middle East as a whole.

- AFP In this handout photograph taken and released on July 20, Sarah al-Amiri (L), Minister of State for Advanced Sciences of United Arab Emirates and Naohiko Abe (R), Senior Vice President, Head of Integrated Defence and Space Systems of MHI celebrate the success of the H-2A rocket launch at the Tanegashima Space Centre in southwestern Japan.

Background: The Hope probe isn't the UAE's first foray into space, and it isn't the end of its ambitions.

In 2019, the first Emirati astronaut, Hazzaa Al Mansoori launched on a mission to the International Space Station.

The end of July 2020 offers a launch window during which Earth and Mars will be aligned at their closest points in two years, which means using less fuel to reach the planet.

The Emirati team wasn't working alone, as it had support from a number of institutions in the US including the University of Colorado at Boulder, Arizona State University, and the University of California, Berkeley. Japan has its own Martian moon mission planned in 2024.

American tourists banned from visiting Bahamas amid ‘raging’ coronavirus pandemic
But unlike Florida , the island nation is taking drastic steps to nip the second wave in the bud. This comes after just reopening its borders to visitors earlier this month. 7/23/2020

South Korea's 1st military satellite launched
Also, Elon Musk confirmed on Twitter that both fairing halves of the Falcon 9 booster were recovered by the company's droneships. Falcon 9 B1058 is officially the world's most quickly reusable rocket after a successful second launch and landing . 7/23/2020

Trump sends well wishes to jailed Jeffrey Epstein associate Ghislaine Maxwell
The main entrance of the Metropolitan Detention Centre, Brooklyn, in NY where British socialite Ghislaine Maxwell is held. Maxwell has repeatedly denied wrongdoing and called some of the claims against her "absolute rubbish". 7/23/2020

GOP congressman: Trump’s Ghislaine Maxwell comments were ‘unacceptably obtuse’
Trump's connections to Epstein and Maxwell came under scrutiny after Epstein was indicted last summer on sex trafficking charges. An indictment alleged that she helped groom the victims to endure sexual abuse and was sometimes there when Epstein abused them. 7/23/2020

Two early coronavirus vaccine trials produce 'encouraging' immune responses
It found neutralising antibodies generated in more than 90 percent of participants and T-cell responses induced in all of them. The hearing was discussing the efforts to develop a safe, effective, and accessible vaccine against COVID-19. 7/23/2020

Tsunami Warning After Alaska Earthquake
The US National Oceanic Atmospheric Administration previously issued an alert, saying waves could reach areas 300 kilometers away. The temblor and ensuing tsunami caused widespread damage and killed 131 people, some as far away as OR and California. 7/23/2020