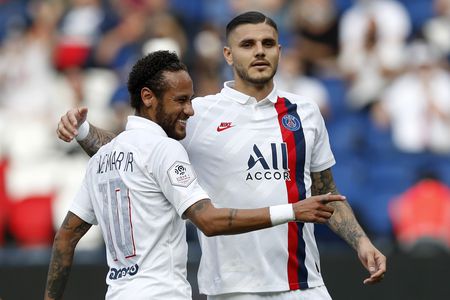 Mbappe looked to have suffered a nasty long-term injury during PSG's 1-0 Coupe de France victory over Saint-Etienne and left the pitch in tears.

A tearful Mbappe was replaced by Pablo Sarabia but the greater concern for PSG will be the severity of his injury ahead of next month's Champions League quarter-final against Atalanta in Lisbon.

The Paris Saint-Germain forward was forced off in the first half after being on the end of a strong challenge from St-Etienne's Loic Perrin, who was sent off for the tackle.

PSG, in a statement via its official website on Saturday, confirmed that the 21-year-old sustained an ankle sprain injury and will be reassessed in three days' time.

"Everyone is anxious. Everyone who saw the foul is anxious. Of course I'm anxious", said Tuchel after his team's 1-0 win. "I think he will undergo tests tonight".

Neymar scored on the rebound in the 14th minute after PSG striker Kylian Mbappe sprinted clear and saw his shot blocked by goalkeeper Jessy Moulin, with only 5,000 fans in the 80,000-seater Stade de France due to strict health protocols.

The atmosphere in the run-up to the first professional game in France after the long hiatus was far from festive with only a handful of people around the stadium before the match.

Neymar's goal proved enough to seal a 13th French Cup for PSG as the second half played out with few incidents of note, with both sides showing tiredness on their return to competitive action.

Should the Parisians progress, the Champions League semi-finals take place on 18-19 August, with the final taking place 5/6 days later.

COVID-19: Over 10,000 Health Workers Infected
The report also showed Seychelles, the Gambia and Eritrea as countries with the lowest confirmed cases in the region. The WHO has been working closely with health ministries to reduce health worker infections since the outbreak began. 7/26/2020