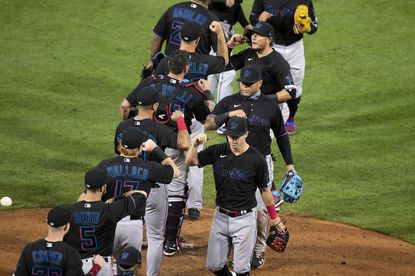 This comes less than a week after the Major League Baseball began its condensed 60-game regular season which has players and teams still traveling from stadium to stadium unlike the NBA's bubble restart, which was reportedly an idea that was presented but was shot down by the player's union.

Major League Baseball commissioner Rob Manfred has denied the season is in trouble even though more than a dozen Marlins players and staff have tested positive for the coronavirus, prompting the club to lock down in Philadelphia.

"The members of the Marlins' travelling party are self-quarantining in place while awaiting the outcome of those results", the Major League Baseball statement said. The Fish were scheduled to play the Orioles in Miami, but the two could instead square off in Baltimore on Wednesday if the Marlins' coronavirus tests yield the desired results, according to Manfred (via Shaikin).

MLB is studying all 30 teams intensely in relation to coronavirus and, while all those on the Marlins' team are asymptomatic (no outward display of diagnostic signs), no baseball team can bench 40 percent of the travel roster.

However, Mayor Carlos Gimenez of Miami-Dade County, said Tuesday that the Marlins should follow 14-day quarantine protocols before returning home, which would create another problem - can the Marlins plan home games as planned August 4-Aug.

"The health of our players and staff has been and will continue to be our primary focus as we navigate through these unchartered waters", Marlins CEO Derek Jeter said in a released statement.

The Marlins called off their trip back to Florida from Philadelphia on Sunday and remain in a hotel in Pennsylvania. "I would say, at least for the rest of 2020 and most likely until there's a vaccine, I personally think you're compromising people's health and well-being for a short-term gain". There are reports Cincinnati may be having problems with infections, creating nervousness in Detroit, which just played there, and Chicago, with the Cubs scheduled to play the Reds tonight. We're doing additional testing.

Players are subject to tests every-other day, and results usually take 48-72 hours to get back.

The season finally got under way last Thursday four months after it had been due to open in March.

The Twins had two players who were regulars in 2019 test positive for COVID-19 when the team reported to Target Field in early July. Unlike the National Basketball Association and NHL, teams have been playing in their regular ballparks - home and road - and not in a "bubble" where players are isolated from the general population.

Martinez said that no other Washington players would opt out after Monday's news; Nationals first baseman Ryan Zimmerman and pitcher Joe Ross announced before the season that they would sit out because of health concerns. Price had decided not to play the season with the Dodgers out of a concern for his own health, as well as his family's health.

Manfred said that an outbreak like this one was not unexpected.

"It might be that they have to go in a bubble", Fauci said, "but I think they're conscientious enough and want to protect their players and protect the personnel that they will do the right thing". "But I don't see it as a nightmare".