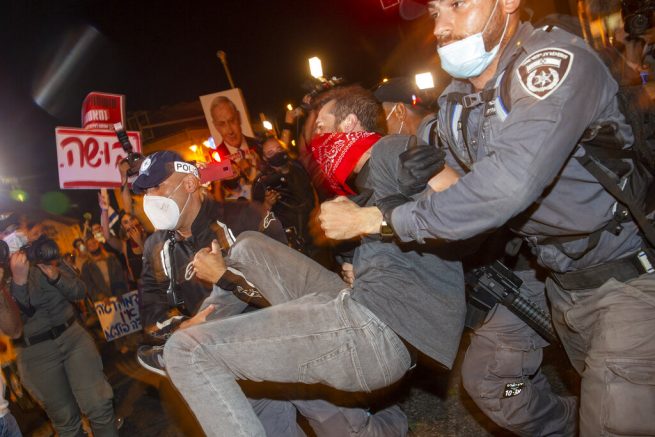 His comments came just one day after thousands of Israelis took part in demonstrations calling for Prime Minister Benjamin Netanyahu to resign over his mishandling of the coronavirus crisis as well as his corruption cases.

Thousands of people demonstrated outside Netanyahu's official residence in Jerusalem and hundreds gathered in a seaside park in Tel Aviv, demanding his resignation and slamming his response to the crisis.

Police say they moved in to disperse the protesters when they tried to stage a procession through the city.

Although the protest was initially peaceful, tensions heightened after police ordered demonstrators to disperse at 11 p.m., citing the sound ordinance law, according to the Jerusalem Post.

At a press conference last week that coincided with protests, Netanyahu addressed the surging protests, warning demonstrators: "Do not drag the country into anarchy, violence, vandalism".

Police scuffled with demonstrators before four large trucks roared into action, spraying water cannons back and forth, scattering the protesters. Two other people were arrested in other locations on charges of attacking protesters with pepper spray and a knife.

Israel had reported less than 10 new infections on some days in May and appeared to have succeeded in containing the spread of the coronavirus.

However, the number of new daily coronavirus cases has since jumped from a few dozen to more than 2,000, which has delayed the plan.

Israel's economy has been battered by the pandemic.

Protesters say the governments offers of financial assistance have been nowhere near enough.

In recent years, anti-Netanyahu rallies have mostly been the domain of Israel's old guardians of liberal values, who accuse the prime minister of using authoritarian tactics to chip away at the country's democratic ideals.

Many of them were seen carrying signs that read, "Bibi, Go Home".

He's charged with fraud, breach of confidence and accepting bribes in a succession of scandals. Hearings will begin in January.