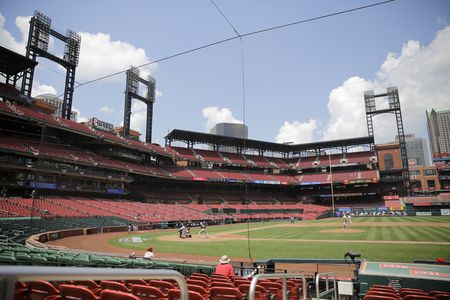 Those hopes have been dashed.

Update: MLB has yet to officially announce it as of this update, but the Cubs-Cardinals series has been postponed and the Cubs are heading back to Chicago tonight.

An eighth St. Louis player has tested positive for COVID-19, prompting Major League Baseball to postpone Friday night's game between the Cardinals and Chicago Cubs. Other MLB teams have played as many as 14 games.

Gordon Wittenmeyer of NBC Sports Chicago was the first to report the postponement of all three games. Seven of the positive results came from players, and six came from team staffers, it said.

If the Cardinals lose another series or another full week, there's no conceivable way they will play 60 games.

The Cardinals have been testing with increased frequency - at least once daily - since their initial outbreak.

The remaining 44 people with the team flew together on a charter from Milwaukee before working out at Busch Stadium on Wednesday and Thursday. And that then raises the question about days off for St. Louis - as of now, they have two left the rest of the season. Catcher Yadier Molina and shortstop Paul DeJong are among the players who said they tested positive.

The Cardinals' prior postponements and the subsequent makeup games meant they were already scheduled to play 55 games in 52 days over the remainder of the season - a challenge that would only get tougher with additional lost games this weekend.