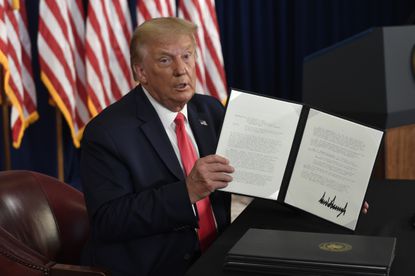 The language of Trump'sunemployment memorandumissued over the weekend defines "eligible claimants" as those receiving "at least $100 per week" in state unemployment benefits - meaning that laid-off workers now receiving less than $100 per week in aid will not see a dollar in federal reliefunless states agreeto increase their benefits.

Trump said earlier that the federal contribution would be redirected from disaster relief money at the Federal Emergency Management Agency - dollars not likely to last more than two months.

But some states have already fully allocated that money for other critical needs.

The president's tweet criticizing Sasse, R-Neb., comes after he issued a statement in response to the executive actions Trump signed over the weekend in an attempt to break the stalemate in negotiations between Republicans and Democrats on Capitol Hill over the fourth coronavirus stimulus relief package. But his order called for up to $400 payments each week, compared with the $600 that people had been receiving. Congress had approved payments of $600 a week at the outset of the outbreak, but those benefits expired August 1 and Congress has been unable to agree on an extension. Employees would need to repay the federal government eventually without an act of Congress. "...if we can get a fair deal, we'll do it this week, but the president needed to take action".

Donald Trump has sparked yet another Twitter drama after referring to himself as "President T" in a post questioning the loyalty of a senator, prompting users to make sarcastic suggestions of what the "T" could possibly stand for.

Congress has already allocated some $3tn for pandemic relief so far. "It simply does not exist".

Mrs Pelosi and Senate Minority Leader Chuck Schumer dismissed the president's actions as "meagre", saying they were "unworkable, weak and narrow policy announcements" in the face of the economic and health crises.

Sasse joined Democrats in harsh criticism of the president, calling the theory behind the actions "unconstitutional slop".

White House press secretary Kayleigh McEnany, meanwhile, asserted that the orders were "entirely within the executive capacity of the president" and pointed to statutes she said supports the legal justification to reallocate funding in times of emergency.

The new executive order President Trump signed says people on unemployment will receive an additional $400 on the unemployment checks, and Zumwalt says they're working to figure out exactly where that money will come from.

The executive order says part of the money will come from the federal level and the state will have to pay the other part.