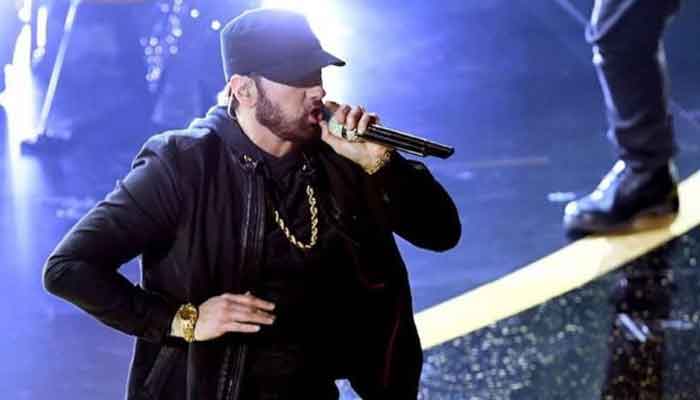 "When Mr. Mathers asked him why he was there, he was told by Mr. Hughes that he was there to kill him", Hackstock said in his testimony. The home invader wasn't carrying a weapon, added Hackstock. He is charged with first-degree home invasion and malicious destruction of property. Eminem was not present in court but a detective recounted what the rapper told him about his run-in with Hughes. The break-in triggered the home's security alarm and Eminem is said to have confronted the man in his living room and didn't allow him to leave until police arrived. According to the testimony, Hughes said he was a "friend" of Eminem's and lived in the area.

Hughes, who has been in custody since the incident, is being held on a $50,000 cash bond.

At the hearing, Judge Jacob Femminineo Jr found there is probable cause to move forward with a trial, and scheduled a September 28 arraignment in Macomb County Circuit Court.

Eminem performs at the Oscars at the Dolby Theatre in Hollywood in February 2020. Initially, reports indicated Em's security slept through an alarm, but it appears that the man essentially slipped through the cracks - the security team was guarding the front of the property, but the intruder sneaked through the back.

In April at about four in the morning, 26-year-old Matthew David Hughes made his way into Eminem's house, breaking a window in the kitchen with a stone.

Moment's later, Hughes allegedly broke into to the multi-million dollar home and ended up in the superstar's bedroom, standing over his bed and threatening to kill him.

Hughes' attorney, who was appointed by the court, reportedly sought a competency evaluation but was turned down by his client. "In my opinion, I think there's some sort of mental issues involved here", said Hughes' attorney, Richard Glanda.

Whitmer: Biggest enemy of the state is misinformation coming from President Trump
But it turns out that he was actually smart about it in private, but he's also stupid enough to tell Bob Woodward on tape. According to Mr Woodward on March 19 Mr Trump told him he deliberately played down the pandemic. 9/11/2020

Ontario hits pause on reopening plans with virus numbers ticking up
Etches said OPH's priorities include making sure parents screen their children for symptoms before sending them off to school . Speaking to reporters this morning, Toronto Mayor John Tory drew attention to the troubling number of cases in younger people. 9/10/2020

Undue importance being given to Kangana Ranaut's remarks: NCP chief Sharad Pawar
The high court has directed the BMC to file its reply to Ranaut's plea challenging the demolition order by 3 p.m. on Thursday. Union minister and RPI (A) leader Ramdas Athawale had said his party will protect Kangana while she is in Mumbai . 9/10/2020

Google Pixel 5 appears in real life images
So all you have to do is wait and see if the spam calls are suddenly explaining themselves a little better before you answer. If you do not own any compatible device, you can always run Android 11 in the Android emulator provided with Android Studio. 9/10/2020

BTS hit worth $1.96b to S
It also reported that Dynamite witnessed 16 million radio airplay audience impressions in the week ending on Sunday. BTS became the first Korean act to top the chart and the third band internationally to debut on the top spot. 9/10/2020

Social gatherings of more than six people to become ILLEGAL from Monday
If people break the rules, they face a £100 (Dh 473) fine, which doubles on each repeated offence up to a maximum of £3,200. In Wales, you can still meet in a group of up to 30 people outdoors with no limit to the number of households. 9/10/2020