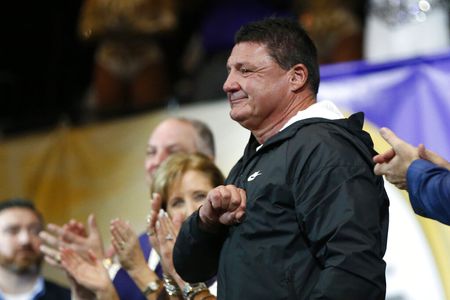 LSU's head football coach has revealed that "most" of his team has already had Covid-19, ahead of the Southeastern Conference's debut this weekend.

"Hopefully that once you catch it, you don't get it again", he continued, noting, "I'm not a doctor".

Asked later for further clarification, Orgeron said he didn't know the exact percentage of players who have had the coronavirus.

Whatever the number is, it can't be too comforting to hear that any team has seen such a wide spread of the virus, as it's likely LSU isn't the only school with more cases than publicly reported.

Orgeron said the training staff tells him who has tested positive and who has to quarantine for how long, "and we got to make adjustments".

He added that all but two or three offensive linemen missed practice because of testing two weeks ago.

One LSU defensive lineman has already made a decision to opt back in for the 2020 season and it's possible he may not be the only one to do so.

"Were probably better off than we've been all camp right now going into the season, obviously we have to be really careful", Orgeron said.

Getting him back would be significant. "If not, like any member of our family, we'll take him back".

He adds that no more than 4 players now have active cases which is good news as their home opener is just around the corner against Mississippi State.