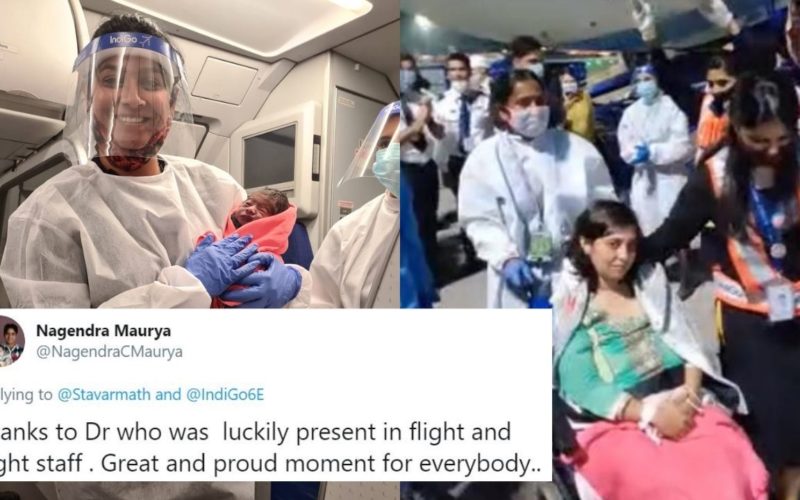 It was a moment of pure joy and sheer happiness as the baby was born prematurely in transit on an IndiGo flight from Delhi to Bengaluru on the evening of October 7th. "A baby boy was born enroute on the Delhi-Bengaluru 6E 122 flight that landed at the Bengaluru airport around 7.30 PM today", an aviation industry source told PTI.

Monica, the pregnant woman in her 30s complained to the cabin crew and with her luck, a plastic surgeon who was also on board attended to her and suspected indigestion and acidity.

Upon landing at Kempegowda International Airport in Bangalore, mom and baby were met with more applause by employees on the ground and a welcome sign as they were transported to a medical facility inside the airport.

The expecting mother was said to have been OK to fly as she was reportedly 32 weeks along - a few weeks shy of IndiGo's 36-week cutoff.

According to the statement, both mother and child are healthy. A senior gynaecologist who was luckily on the flight helped her when she went into premature labour. "Congratulations to all. Kudos to your training Team First Aid", added the statement. Additionally, all flight operations were normal during the delivery. Was on @IndiGo6E 6E 122 flight to BLR, woman gives birth mid-indiair, incredible team work of indigo flight attendants.

Another Twitter user present on the plane also lauded the trained and helpful flight attendants. The mother is finally taken to the ambulance on a wheelchair.

Ram 700 Is a Rebadged Fiat Strada Pickup Truck for Latin America
Another engine on offer is a more potent 1.3-litre Firefly turbocharged mill churning out 99 PS and 128 Nm. The transmission is five-speed manual, and the drive stays locked on the rear axle. 10/12/2020