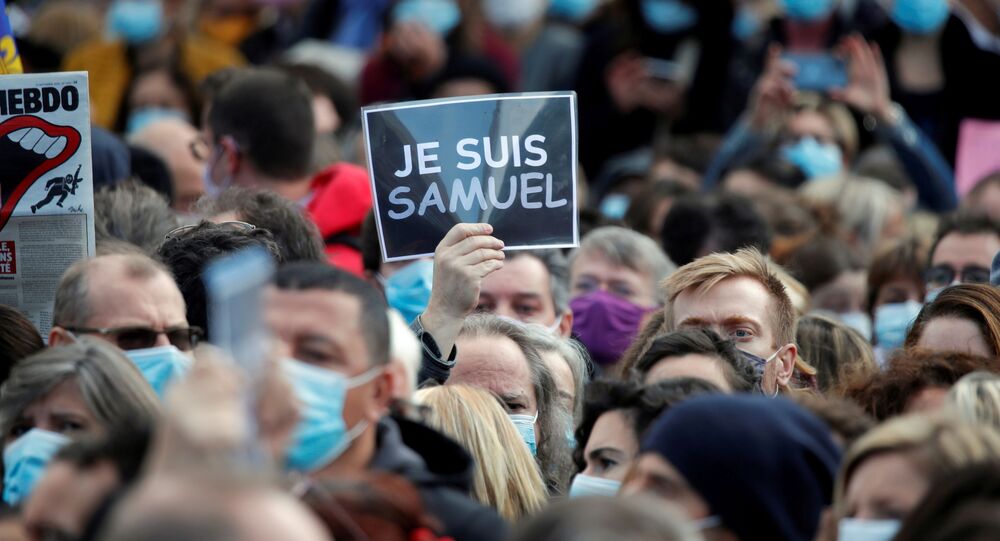 Various cities all around France rallied on Sunday following the decapitation of a teacher outside his school for showing pupils cartoons of the Prophet Mohammed.

Some of those being questioned are believed to have posted messages of support for the killer of Samuel Paty.

The French investigators said they were treating the attack as "a murder linked to a terrorist organization", adding that the suspect was not known to intelligence services, and had been granted a 10-year residency in France as a refugee in March.

They discovered the dead man and soon spotted the suspect, armed with a blade, who threatened the officers as they tried to arrest him.

Gerald Darmanin said "dozens" of individuals were being probed for suspected radicalization.

One rally took place at the Place de la Republique in Paris, a traditional site of protest where around 1.5 million people demonstrated in 2015 following a deadly attack on Charlie Hebdo's offices by Islamist gunmen.

The assault happened on the outskirts of Paris at around 5 pm (1500 GMT) near a school in Conflans Saint-Honorine, a western suburb of the French capital.

The knifeman was an 18-year-old Moscow-born man who, according to witnesses, shouted "Allahu Akbar" as he attacked the teacher with a large kitchen knife, later posting pictures of the killing on social media.

What's the latest in the investigation?

It was not the first time, students say, and they say the teacher notified Muslims in the class they were free to leave, warning they might find the images shocking.

Islam forbids images of the prophet because it is believed it will lead to idolatry. "Secularism, the backbone of the French Republic, was targeted in this vile act", Castex said.

What has the reaction been in France?

Mairbek Vachagaev, a Chechen emigre living in Paris who runs a newsletter for the Chechen community, wrote on the Telegram messaging service after Friday's killing: "I'm sure that the whole 67,000-strong Chechen Diaspora in France is in shock over what happened". Thousands gathered at weekend rallies to honour Mr Paty with people carrying placards reading "Je suis enseignant" (I am a teacher).

© Provided by Associated Press A person holds up a banner that reads: "For the freedom of speech", during a demonstration in Lyon, central France, Sunday, Oct. 18, 2020. "My son said to me, "He was super nice, this man". "I'm thinking of you, Samuel".

Anti-terrorism prosecutor Jean-Francois Ricard said on Saturday that the attacker had asked pupils in the street to identify Paty ahead of the beheading, described by French President Emmanuel Macron as an "Islamist terrorist attack".

The massacre in now has been in the public eye again in France due to a number of people believe alleged to be connected to the killings having been out on trial in recent weeks.

Macron's office said a national tribute would be held for Paty on Wednesday.

Paty, 47, was attacked on his way home from the junior high school where he taught in Conflans-Sainte-Honorine, 40 kilometres (25 miles) northwest of Paris.

Numerous attendees were teachers themselves, according to France 24, and spoke of being shocked and saddened by the killing.

Of the total number of suspects, 180 people are now in prison and 51 were due to be arrested in the next hours, the police union source said. "They are part of a violent approach".