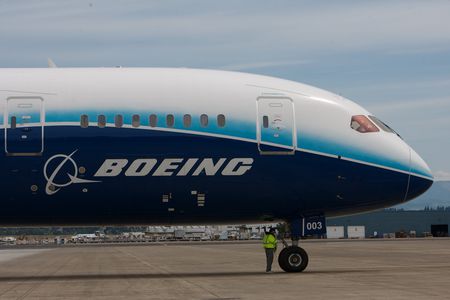 As Boeing scrambles to cut costs, Calhoun told employees in a memo on Wednesday Boeing now expects to eliminate some 30,000 jobs through buyouts, layoffs and attrition - almost double what it initially planned - for a global workforce of around 130,000 by end-2021.

The company said it expects to reduce its global workforce to about 130,000 employees by the end of 2021, down from the current level of approximately 145,000.

Boeing will cut more jobs as it continues to bleed money and its revenue fades during a pandemic that has smothered demand for new airline planes.

Boeing has been whipsawed by a drop in revenue after its 737 Max was grounded in March 2019 following two deadly crashes, and then a pandemic that has caused air travel to plunge and left airlines with more planes than they need.

Boeing also announced a $67 million charge in the quarter on its KC-46 aerial refueling tanker program, which Boeing attributed to Covid-19 disruptions and production issues. Boeing handed over just 28 planes to customers in the September quarter compared with 62 a year earlier, and has become more reliant on its defense business to drive revenue and profit. So far this year, Boeing's commercial division has seen its revenues drop by 54%, while its defense and space division has contracted by just 3% so far this year.

Boeing president and chief executive Dave Calhoun said the pandemic had "continued to add pressure" to the business.

The ongoing deep impacts of COVID-19 on the commercial aviation market are reflected in Boeing's lower revenue, earnings and cash flow compared to the same period past year, its president and CEO Dave Calhoun said.

Boeing reported an adjusted loss of of $1.39 a share, better than the average shortfall of $2.08 expected by analysts. The company said it plans to keep cutting jobs.

Calhoun has taken steps in 2020 to bolster the company's cash position since the coronavirus devastated the travel market. Southwest's fleet consists entirely of Boeing 737s, and the airline was forced to cancel thousands of flights a year ago because of the Max grounding.

On the 737 MAX, Boeing says, "Following the lead of global regulators, Boeing made steady progress toward the safe return to service of the 737 MAX, including rigorous certification and validation flights conducted by the U.S. Federal Aviation Administration, Transport Canada and the European Union Aviation Safety Agency".

Coral Reef Bigger Than The Empire State Building Discovered In Queensland
Scientists discovered this coral reef while conducting underwater mapping of the northern Great Barrier Reef seafloor. Rising about 550 yards in the Great Barrier Reef , it's the first to be discovered in more than a century. 10/29/2020

NASA, ESA ink pact to collaborate on Artemis Gateway
For years, scientists have known that water and ice exist on the moon in some form, likely at its poles in deep, dark craters. They'll have a better idea of the sources "if we can get down on the surface and analyze samples of the ice", Hayne said. 10/29/2020

Germany announces a partial lockdown in November
The number of Covid-19 patients in intensive care meanwhile has surged from just under 400 in early October to 1,470 by Tuesday. The new restrictions, widely dubbed a "lockdown light", are set to take effect on Monday and to last until November 30. 10/29/2020

First COVID vaccine could be here "within weeks"
Full details are expected to be laid out in scientific journals once they have been reviewed by other experts. "Immunogenicity responses were similar between older and younger adults", an AstraZeneca spokesperson said. 10/29/2020

Study suggests coronavirus immunity drops after 3 months
It remains unclear what level of immunity antibodies provide, or for how long this immunity lasts, scientists said. We don't yet know how long it lasts. 10/29/2020