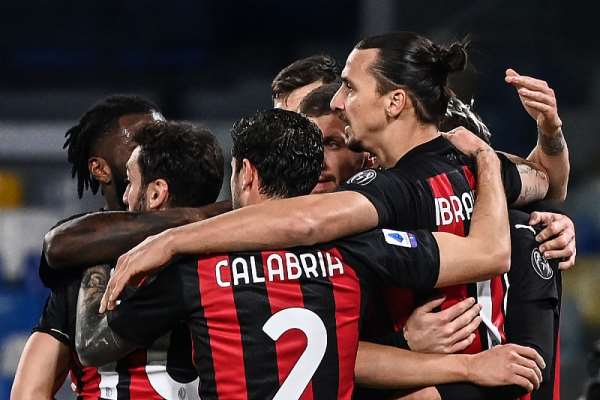 AC Milan won 3-1 away to Napoli on Sunday evening and the evergreen Zlatan Ibrahimovic was the hero again with his double against the Partenopei.

Aged 39, Ibrahimovic made more history, surpassing Lazio's Silvio Piola (29 years old in 1942-43) for the record with a league-high 10 goals.

Dries Mertens pulled one back for Napoli just after the hour mark.

Yet there were concerns for the visitors when Ibrahimovic was forced off with a muscle problem with 11 minutes remaining, and the Swede was pictured sitting on the bench with an ice pack strapped to the back of his left leg.

Milan assistant coach Daniele Bonera, who stepped in for head coach Stefano Pioli after he tested positive for COVID-19, was unable to shed any light about the severity of the injury.

Milan, two points clear of high-flying Sassuolo, have collected at least 20 points from the first eight matchdays for the second time in the three points for a win era - the Italian powerhouse also achieved the feat in 2003-04 as they went on to secure the Scudetto.

Zlatan Ibrahimovic continued his scoring run in Serie A as he scored a brace against Napoli to keep AC Milan at the summit of the table.

He didn't score in the Europa League opener against the Hoops but was an important player at Parkhead and it will be a relief that the Celtic defence will not have to face him once more. "We weren't built to win straight away, but we're growing game after game".

EU says first coronavirus vaccinations possible by Christmas
The European Commission has announced the approval of an Advanced Purchase Agreement for an initial 80 million doses of Moderna's mRNA vaccine being developed against COVID-19. 11/26/2020